Everything About Fiction You Never Wanted to Know.
Jump to navigation Jump to search
/wiki/Jim Rosscreator 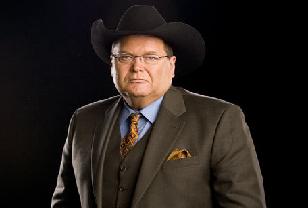 James William "Jim" Ross (a.k.a. "Good Ol' JR" or just "JR") is one of the greatest (and most beloved) commentators in the history of Professional Wrestling, having provided commentary for the WWE for almost 20 years (and having worked for several other promotions, including WCW, prior to starting with WWF/E). In addition, he is the man behind his own brand of barbecue sauce, has written cookbooks, and has opened a barbecue restaurant. He is also close friends with Stone Cold Steve Austin. He is semi-retired from commentating now, though he does come back every now and then. In his spare time, he also runs a website that peddles his own brand of condiments and barbecue products.

As usual, That Other Wiki has additional information on his life and career.

"That one eyed monster, Kane!"

"He's either crazy as hell of the toughest SOB I have ever seen... in this type of environment." (a Freudian Slip because Ross was honestly calling Mankind the toughest SOB period, but Stone Cold Steve Austin is meant to be that.)

"Jericho looking right at you Triple H". (Mistaking Chris Benoit for Chris Jericho during the former's entrance on an episode of Raw)

He accidentally said "WWF" on RAW 9/19/2011, which was censored. He apologized for it the next day on Twitter.

"Pat Patterson coming up behind as always."