Everything About Fiction You Never Wanted to Know.
Jump to navigation Jump to search
/wiki/Jimi Hendrixcreator 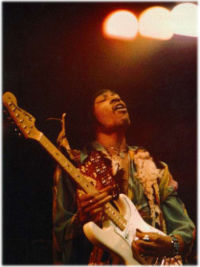 "'Scuse me while I kiss the sky."
—Purple Haze, source of the most famous Mondegreen of all time

James (Jimi) Marshall Hendrix (1942-1970) was an American musician and is widely regarded as one of, if not the best electric guitarist of all time. After playing in back-up bands for artists like Little Richard and the Isley Brothers, he rose to prominance as the lead singer and guitarist in his band The Jimi Hendrix Experience. First achieving success in England, his American breakthrough was at 1967's Monterey Pop Festival, where he managed to upstage The Who having destroyed their instruments by setting his guitar on fire. Hendrix later played on the notorious 1969 Woodstock festival, where his performance of "The Star Spangled Banner" pretty much revived a very tired crowd, and the 1970 Isle Of Wight Festival. Died early at the age of 27 of a drug overdose, the second (only a few months after Brian Jones) of several prominent rock artists to die at that age (although his blues roots have led some to say that he merely moved the curse from blues to rock, as the legendary Robert Johnson had died at 27, too).

Hendrix was highly influenced by the Blues and Jazz, and in particular solo guitarists working in that genre. In turn he as codified techniques and trends many other bands and artists had used, such as amplified feedback (done before by Jeff Beck of The Yardbirds, Pete Townshend of The Who and originally by Dave Davies after mutilating his amplifier), use of wah-wah pedals (done earlier by Eric Clapton in Cream) and his extended over-the-top solo performances (Eric Clapton before him again). This helped establish the electric guitar as a unique sound rather than an amplified version of the acoustic guitar (again, Clapton was really first on Beano). While people would credit The Beatles' song "Helter Skelter" and Steppenwolf's "Born to Be Wild" with helping start the Heavy Metal genre, many credit Hendrix as the artist who really set that ball in motion with his hard music that a supposed music magazine article described as "like bars of metal raining down on the stage."

This all having been said, however, Jimi's guitar work combined with his exceptional songwriting and composition, his experimental albums that did not stay strictly in one genre of music, and his aforementioned outrageous stage theatrics earned him enough of a reputation to make him one of the most prominent rock performers of the late 60s. Not for nothing was he selected as Woodstock's last artist to perform, after all. Ironically, this popularity wasn't quite reflected on radio in his lifetime, as related in a documentary produced after his death. Black radio, at the time entrenched in the likes of Aretha Franklin, James Brown and the roster of Motown Records amongst other, more straightforward rhythm and blues artists, wanted little to do with his heavy rock guitar sound. And many white rock radio stations, places one might have thought would be a more natural home for his songs, simply thought he sounded "too black." Contrasting this with his frequently standing-room only crowds says a lot about the tastes of radio programmers compared to their audiences.

While many today mention him as the most influential guitarist of the era, it was only after his death. Back when he was alive he was still second behind both Eric Clapton (his idol) and Jeff Beck. Regardless of this, multiple guitarists who came after him were indeed influenced by both his work and his on-stage theatrics, including Ernie Isley, a latter-day member of the Isley Brothers, the same group Jimi used to play back-up for.

Two of his most famous songs are "Purple Haze" and his cover of the Bob Dylan classic "All Along The Watchtower".

"This guy had a dick. Like an anaconda head, swinging in the wind."