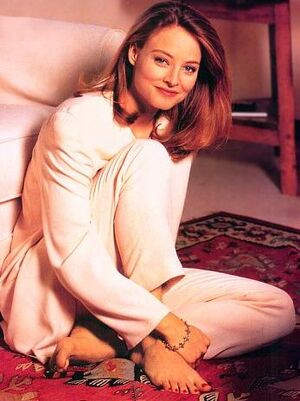 Arguably one of the world's favourite actresses, Jodie Foster (born Alicia Christian Foster) received her first Oscar nomination in 1976 at age thirteen (in Taxi Driver) and has never looked back. More than three decades later, with two Best Actress Academy Awards and two more nominations, a never-ending stream of critical praise and a flawless record as a top draw at box-office for her wide-releases, Foster is known for playing a wide variety of lead roles in virtually every single genre, including foreign films, films she's directed, indie films, and some of the most popular movies of all time. Her Clarice Starling in The Silence of the Lambs was named the top heroine in American film by the AFI (as well as winning her her second Oscar for a lead role). Contact led to an asteroid being named in her honour.

Incidentally, that last part is her own personal Berserk Button. To this day, interviewers are warned not to bring it up before talking to her, and she's been known to walk off immediately if they ignore that advice.

Jodie Foster has performed in the following roles:
Retrieved from "https://allthetropes.org/w/index.php?title=Jodie_Foster&oldid=1950579"
Categories:
Cookies help us deliver our services. By using our services, you agree to our use of cookies.