Everything About Fiction You Never Wanted to Know.
Jump to navigation Jump to search
/wiki/Johann Wolfgang von Goethecreator 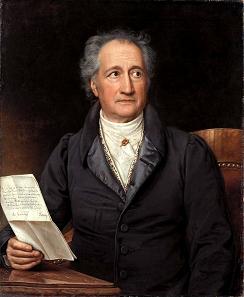 Das also war des Pudels Kern!
So that was the poodle's core!

Johann Wolfgang von Goethe is to German what Dante Alighieri is to Italian, William Shakespeare is to English, Miguel de Cervantes to Spanish or Alexander Pushkin to Russian: the most important author of his language.

For the benefit of English-speakers, his name is pronounced (roughly) "Yo-hawn Volfguhng phone Götuh" -- not "Go-eth". Born in 1749 in Frankfurt am Main, Goethe rose to fame with the drama |Gotz Von Berlichingen and the novel The Sorrows of Young Werther. Werther, the hero of the latter story, even was a role model for many young people of Goethe's time, many of them adopting his signature yellow waistcoat and his philosophy. This wouldn't have been so bad if it weren't for the fact that the story ends with Werther's suicide.

Despite being the author of such an unintentionally controversial book, Goethe soon made his career at the court of Weimar, where he was an important minister for the grand duke, and where he made friends with Friedrich Schiller, the other most important German author. Also, he got ennobled there. (Hence the von in his name.) Most of his works were created in Weimar. Unlike what one would expect from famous German writers at the time, Goethe did not shy away from including lots of rude and dirty jokes in his works. Götz von Berlichingen, a biographical piece about a famous soldier, is known as the play in which the main character speaks the line "But he, tell him that, can kiss my arse!" (Indeed, the subject of the play is said to have invented the insult - Goethe merely quoted him.)

Although mostly known for his literary works, Goethe also dabbled in many fields of science. For example, he discovered the incisive bone, though others had discovered it independently before him.

Goethe died in 1832 in Weimar. His last words were (allegedly), "More light!"

Some of Goethe's works: