Everything About Fiction You Never Wanted to Know.
Jump to navigation Jump to search
/wiki/John Kricfalusicreator 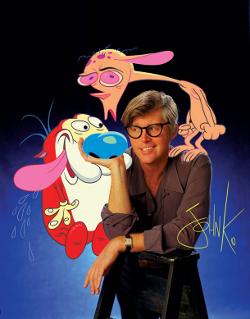 John Kricfalusi (pronounced as kris-fa-LOO-see) is a well-known animator, the creator of such series as Ren and Stimpy and The Ripping Friends. He worked on Mighty Mouse: The New Adventures with his friend and mentor Ralph Bakshi, as well as the very short lived revival of Beany and Cecil, with the offspring of his hero and mentor Bob Clampett. He has also dabbled in webtooning with "The George Liquor Show" and "Weekend Pussy Hunt", being a pioneer of Flash-based cartoons. He was the founder of the defunct animation studio Spumco.

John K is a fan of “classic” cartoons from The Golden Age of Animation, such as Looney Tunes. He is a controversial figure in animation history, with some seeing him as the man who brought back “cartoony” cartoons to television, while others see him as an egotistical has-been. (This is not the place to debate either of those things.)

He maintains a blog, John K Stuff, wherein he posts information on classic cartoons and practical knowledge for aspiring animators. There is also a more distilled version with advice and lessons on cartooning and animation, John K Curriculum. Note that both are home to John K’s notoriously controversial opinions regarding animation, including his belief that good drawings are the back-bone of a cartoon's success (rather than it being the story, which is the common contemporary belief). He is very opinionated, and some rants may be a little overwhelming.

Shows he has worked on / Works of his include:

Also see the YMMV and Trivia tabs up top.

John Kricfalusi provides examples of the following tropes:
Retrieved from "https://allthetropes.org/w/index.php?title=John_Kricfalusi&oldid=1868542"
Categories:
Cookies help us deliver our services. By using our services, you agree to our use of cookies.