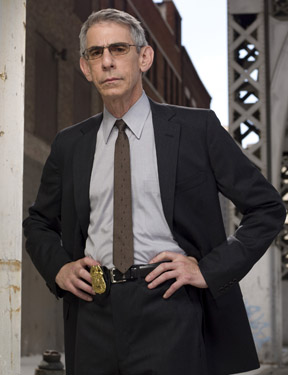 What we have here is a small, semi-just-for-fun page for the character with the single most appearances outside his own series this side of a Public Domain Character, making him the king of the Intercontinuity Crossover.

In every appearance, Munch is portrayed by Richard Belzer, who outside of this role is better known as a stand-up comedian. As of 2020, Belzer will have played Munch for 27 years and 28 consecutive seasons as a regular on two different shows (along with cameos and crossover appearances on at least 10 others) which has him tied (though technically one year behind chronologically as the first season of Homicide premiered mid season) with Kelsey Grammer as Frasier Crane (on Cheers and Frasier), James Arness as Matt Dillon and Milburn Stone as Doc Adams (both of Gunsmoke) as American television's longest running live action character.

Munch has become the only fictional character, played by a single actor, to physically appear on 10 different television series, on 5 different networks.

As a main character

As a guest star

Referenced but not seen

Retrieved from "https://allthetropes.org/w/index.php?title=John_Munch&oldid=1781997"
Categories:
Cookies help us deliver our services. By using our services, you agree to our use of cookies.