Everything About Fiction You Never Wanted to Know.
Jump to navigation Jump to search
/wiki/John Scalzicreator 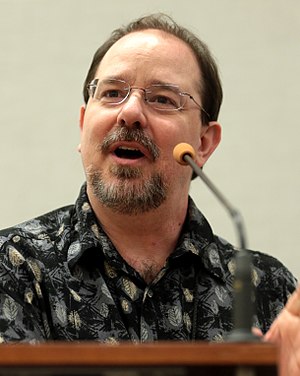 Dirk Moeller didn't know if he could fart his way into a major diplomatic incident. But he was ready to find out.
—Opening sentence of The Android's Dream

John Scalzi is best known for taping bacon to his cat, though his science-fiction writing, particularly his Old Man's War trilogy, comes a close second.

He has also published two more comedic sci-fi novels, Agent To The Stars and The Android's Dream. Agent to the Stars is available for free on Scalzi's website. A third novel of this type, Red Shirts, will be published in 2012. He also wrote The Shadow War of the Night Dragons, Book One: The Dead City. It's an April Fools' joke... that was nominated for a Hugo Award.

Scalzi was also a creative consultant for the TV show Stargate Universe.

Works by John Scalzi with their own trope pages include:

Other works by John Scalzi provide examples of: