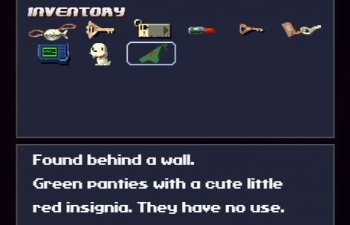 Finally! You braved the Bonus Dungeon, beat the Bonus Boss, and now you can claim the ultimate reward: the... Golf Club of Hilariously Low Damage? Seriously?

A joke item is a weapon or object that is so pathetically worthless that you can't help but smile. Typical joke items fall in to one of two groups:

For the surprisingly powerful equivalent of the first type, see Lethal Joke Item and Nerf Arm. Characters that fill this role are Joke Character. Compare Improbable Weapon User, Useless Useful Spell. Contrast Infinity+1 Sword (which is Purposefully Overpowered). Not to be confused with Weapons That Suck. Also not to be confused with The Killing Joke. If the item's name is a misspelling of a more useful item's name, it's a Poison Mushroom.

Examples of Joke Item include:

Retrieved from "https://allthetropes.org/w/index.php?title=Joke_Item&oldid=1835100"
Categories:
Cookies help us deliver our services. By using our services, you agree to our use of cookies.