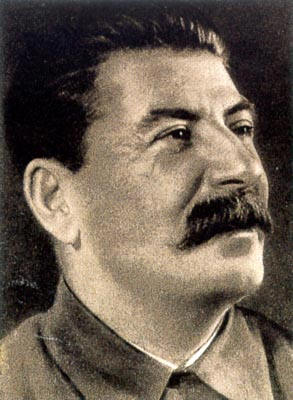 Long live Stalin, he loves you; sing these words, or you know what he'll do!

Popularly considered to be the most evil Georgian (not the US state) in human history, Josef Stalin (born Ioseb Besarionis dze Jughashvili) ruled the Soviet Union from the mid-1920s until his death in 1953.

Before Red October, he had an interesting and colorful early life. After dropping out of an Orthodox seminary, he helped the Bolsheviks by robbing banks (for which he did time in jail) and writing poetry. His role in Red October wasn't large at all - at least, according to Trotsky. He was put in charge of the Bolshevik Party's newspaper and organizational matters, which were background but fairly important jobs. He may have been late for the Revolution, but it didn't end in one night.

Lenin was incapacitated by a series of strokes in the early 1920s, and this allowed Stalin to begin a slow and methodical rise to power (the sort of rise to power that makes for a very boring story, which is probably why it has never been depicted in a major work of fiction). First, Stalin managed to get himself elected to the position of General Secretary (in those days, an actual secretarial position, although one with a great deal of power due to its control over the rank-and-file membership; Trotsky referred to him as "Comrade Card-Index"), which made him powerful but not that powerful. Shortly before his death, Lenin wrote a testament which said that Stalin should be removed as G-S, though also recognized both he and Trotsky as the two most capable candidates for leadership- Stalin suppressed this in later years, but the testament was discussed in the Central Committee before he secured his power base; ironically, this was probably the first time Lenin or any senior Party member had seriously considered Stalin as having that kind of potential, and it might have backfired on Lenin (who was seriously ill and temperamental at the time- the Party even thought about giving him a phony copy of the Party newspaper so as to calm him down and stop him pestering them) by drawing attention to Stalin's talents, giving him a boost of respect and reputation [2]. Stalin began promoting his supporters to key positions, and he deftly navigated the complex world of Soviet politics, switching sides on the debate between developing Soviet communism or promoting world revolution twice to remove his rivals.

After he got all the power he wanted (sometime around 1930), Stalin initiated a huge industrialization and collectivization scheme in the USSR, overseeing an astonishing period of economic growth and initiating programs that would bring mass literacy and a greatly increased life expectancy to what had been an impoverished, rural populace -- at massive human cost, especially in Ukraine.

To say that Stalin was paranoid is to say that the Pacific Ocean is a little wet. The man saw enemies everywhere, and a culture of denunciation developed in the USSR big-time. Stalin built, during his reign, perhaps the most comprehensive and thorough edifice of state terror that has ever existed on earth, personified in the NKVD (ancestor to the KGB). Stalin purged (read: fired, imprisoned or killed, depending on the situation) pretty much every high-ranking communist who didn't bend over backwards to show loyalty to him. These purges considerably weakened the Reds with Rockets before 1941. By the time the war against Germany began, Stalin had killed every single leader of the original Bolshevik Party, and replaced them with his cronies. He also "revised" history to make his role in Red October much bigger and had statues placed of him across the USSR. (Lenin originally had prohibited any statues of communist leaders because in his opinion "A statue is a pigeon's best friend." The one exception was a pair of statues of Marx and Engels in Moscow. This was disregarded after his death and Stalin had statues of Lenin placed throughout the country as well.)

It has been suggested that when Stalin suffered his fatal stroke in early 1953, it took so long to get him medical attention because no one wanted to check on him and risk waking him up if he was only oversleeping. There is also a theory that he was poisoned by his chief of secret police, Lavrentiy Beria.

How many died as a result of his rule is a matter of debate (including whether the mass famines are counted). Estimates today range from 1 to 30 million, not counting the war. In fact, there are about as many different estimates as there are authors. This is because of conflicting statistics, but also because of deep controversies about where to draw the line between "killed" and "allowed to die".

Following the Great Patriotic War, Stalin's cult status was massive and remained so until a few years after he died. His reputation wasn't seriously hit until Khrushchev's seminal "Secret Speech" in 1956, in which Stalin was denounced and accused of numerous crimes -- this speech reportedly caused not only open weeping but heart attacks in the audience.

Most of what we know about Stalin originates from the works of exiled political rival Leon Trotsky (who was eventually assassinated by Stalin's agents) and, later, from Khrushchev-era revelations - though these ended with his successors and were strictly controlled regardless. Trotsky portrays Stalin as a virtual non-entity before his rise to power, and a man of average intelligence, limited vision, and a false Marxist. Other historians, however, suggest that this was politically motivated smear, and that the real Stalin was highly intelligent and extremely charismatic, and fanatically devoted to his cause. Whether Stalin did or did not follow Marxism is a topic of huge controversy (with 3 or 4 different sides, and debates that can go on forever). What is clear is that Trotsky and Stalin really, really hated each other, and the USSR would have been a different place with Trotsky in charge. Trotsky's supporters argue that it would have been a much more democratic place, closer to the communist ideal. Stalin's supporters argue that it would have quickly turned into a German-speaking place, due to Trotsky not being ruthless enough to win the war with Germany. Many modern historians think it would not have been much different at all, as Trotsky was almost as ruthless, violent and fanatical as his rival.

Likewise, some historians also argue that Stalin was more important to the pre-Revolution Bolshevik party than Trotsky gave him. He single-handedly designed Bolshevik policies concerning ethnic minorities who'd been living under the Russian Empire (being a member of such a minority himself), and likely had a hand in other official policy. Lenin did have a falling out with Stalin and recommended Stalin's removal from the General Secretary position in his last testament, but Stalin would have retained his seat in the Politburo and would have been quite influential even were he not the G-S. The fall out, as it happens, was that Stalin had insulted Lenin's wife, which is not exactly the same as fearing he'd end up a despot.

In other words, History Marches On, perhaps subverting many of the tropes listed below - specifically Almighty Janitor, Foreshadowing, From Nobody to Nightmare, and Kicked Upstairs (subversions are noted).

Josef Stalin provides examples of the following tropes:
Appearances and references in fiction include

Retrieved from "https://allthetropes.org/w/index.php?title=Josef_Stalin&oldid=1842187"
Categories:
Cookies help us deliver our services. By using our services, you agree to our use of cookies.