Josie and the Pussycats

Everything About Fiction You Never Wanted to Know.
(Redirected from Josie and the Pussy Cats)
Jump to navigation Jump to search 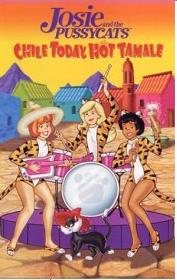 Although based on an Archie Comics publication, the Josie and the Pussycats animated series was produced by Hanna-Barbera rather than Filmation. The all-female rock trio comprised guitarist Josie McCoy, tambourinist Valerie Brown and drummer Melody Valentine. Valerie is Black and Nerdy, Melody is a Dumb Blonde and Josie is of average intellect.

It was adapted into a live-action film in 2001. For information on that, click here.

Tropes used in Josie and the Pussycats include:
Retrieved from "https://allthetropes.org/w/index.php?title=Josie_and_the_Pussycats&oldid=1936450"
Categories:
Cookies help us deliver our services. By using our services, you agree to our use of cookies.