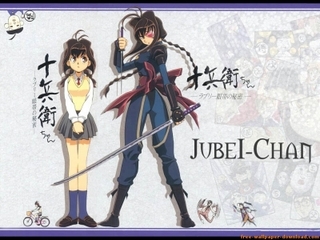 Magical Girl Ninjas with the tropes of both genres.

Jubei-chan is a series of contrasts, done expertly by the director of Kodomo no Omocha. While some series chafe from the whiplash of constantly switching between serious and silly, Jubei-chan does it very well. The fight scenes are amazing.

300 years ago, Yagyu Jubei was the greatest swordsman Japan had ever seen. His feats were legendary. But eventually he started getting old, and he didn't have an heir. Despite his style of swordsmanship being the standard, nobody quite did it correctly. He didn't want his technique to be lost, so he somehow bound it up into an eyepatch shaped like a heart. He sent his most trusted servant to find the one who would be able to access the eyepatch -- he would know them by their "plump bouncy bon bons." The servant, Odago Koinosuke, left on the geas that he would find the next Jubei if it took the rest of his life, and beyond.

Unfortunately, the original Jubei's fame did not come without a price. The Yagyu family crushed all other schools of swordsmanship and slaughtered any who continued to resist. Jubei himself died in a battle with the teacher of the last school to fall, Ryujouji Daigo.

The Ryujouji clan and school swore an oath, that they would never forget what was done to them, and they and their descendants would wipe out anyone who would take up the name of Jubei. Not even death would stop this pledge.

Enter Jiyu Nanohana, an Ordinary High School Student...yeah. She's rather happy with her widower father, Sai, and her friends at school. She even has a cute nickname, Jiyu-bei. ...say it fast and it sounds like "Jubei." Isn't that funny?

This changes when she's approached by a rather strange looking guy in antique clothing, who says that she is the Chosen One, and if she would please accept this Lovely Eyepatch?

And thus, she becomes Jubei-chan, the second incarnation of Yagyu Jubei! Pity there isn't any evil around. Oh, wait. The Ryujouji School has been waiting for 300 years for this little bit of payback.

Obviously, Jiyu wants nothing to do with it. It's a circular problem. But the Ryujoujis won't listen. Also, their grudge is so powerful that it infects their souls. In order to save them, Jiyu finds a way to modify the Jubei technique, and make a sword technique that cuts the hate and undeath out of their very spirits. Those cut are freed to assimilate into the modern day and forget the past.

Nevertheless, can she take on the entire Ryujouji Clan and still be Jiyu, or will she get caught up in the bloodshed that occured 300 years ago?

There is a second season, Jubei-chan: Revenge of the Siberian Yagyu. In it, another dead clan, this time a splinter group of the Yagyuus, want revenge on Jubei. They are overshadowed, however, by another Jubei-chan! This one, Freesia Yagyu, is the biological daughter of Yagyuu Jubei, preserved for 300 years by being frozen in a glacier. She's very upset that her father's inheritance has gone to another girl -- and she wants it back. She becomes simultaneously Jiyu's manipulative best friend and Jubei-chan's worst enemy; she knows who Jiyu is. Jiyu doesn't know who she is. The second season has, arguably, some of the greatest sword battles in all of anime.

Tropes used in Jubei-chan include:

Retrieved from "https://allthetropes.org/w/index.php?title=Jubei-chan&oldid=1855109"
Categories:
Cookies help us deliver our services. By using our services, you agree to our use of cookies.