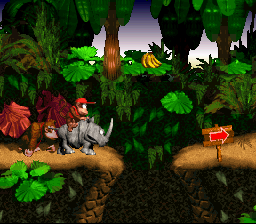 The big brother of The Lost Woods. Jungle stages are natually more tropical in nature, and often feature vines to swing from Tarzan-style. Ruins of cities and Mesoamerican-style pyramids are common, and any water is likely to contain crocodiles, piranha or both.

Enemies in Jungle Japes often include snakes (often very big ones), monkeys and apes, colorful birds, insects and spiders, the aforementioned crocodiles and piranha, restless and savage natives, and the occasional lion, tiger or other big cat. Most of them are, you guessed it, trying to kill you.

Rants about the accuracy of such depictions fall under The Amazon. The Hungry Jungle is an entirely less fun version.

Examples of Jungle Japes include: