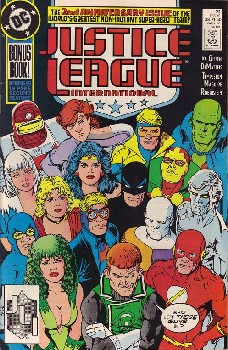 In 1987, comic books were getting Darker and Edgier, and most of the "Big Seven" heroes of DC Comics were unavailable for varied reasons. So writers Keith Giffen and J. M. De Matteis had to work with a cast of mostly minor characters, including such nonsuperpowered heroes as Blue Beetle and Mister Miracle. What to do then? Giffen had a great idea: instead of going Darker and Edgier, they went Lighter and Softer, turning the comic book into a super hero comedy. Yes, they get to fight against vampires, Mad Scientists, dictators, giant Nazi robots, alien invasions and the like, but most of their plots dealt with completely bizarre situations: Guy Gardner and Ice having a date at an ice show, the heroes go to school to learn French, Blue Bettle and Booster Gold build a casino at a paradise island, or the mayhem at both their embassies caused by... an alley cat (yes, they made a 2 issues crossover with that). They were also used to fight Harmless Villains and Ineffectual Sympathetic Villains, and had to deal with annoying "good guys" as G'Nort or The Beefeater.

The initial cast (Batman, Martian Manhunter, Guy Gardner, Blue Beetle, Black Canary, Doctor Fate, Captain Marvel, Mister Miracle and his sidekick Oberon) got new members afterwards, such as Booster Gold or Fire and Ice (from the Global Guardians, a Multinational Team that the United Nations disbanded to form the JLI). They got a related series, "Justice League Europe" (JLE), with Captain Atom, Power Girl, Metamorpho, The Flash, Ralph Dibney (Elongated Man) and his wife Sue, Rocket Red, and Animal Man. All teams were managed by Maxwell Lord, a crooked but ultimately good-hearted man. (He was turned into an evil villain during the Countdown to Infinite Crisis, but was not a villain at all back then).

When Giffen and Dematteis left the series, they made a Grand Finale were the league lost the UN support and disbanded. Then, the League returned as the "Justice League Spectacular", with a standard super hero style. These folks returned in the miniseries "Formerly Known as the Justice League" and "I Can't Believe It's Not the Justice League". As the 'real' Justice League was now in operation, they were named "The Super Buddies" instead.

The team was reunited by Judd Winick in the well-received Justice League: Generation Lost maxi-series, albeit with the new Blue Beetle and Rocket Red filling in for their deceased predecessors. This lead to a 2011 New 52 relaunch of Justice League International, which featured many of the same characters, as well as Vixen, Godiva and August General in Iron.

Tropes used in Justice League International include:
Retrieved from "https://allthetropes.org/w/index.php?title=Justice_League_International&oldid=1905997"
Categories:
Cookies help us deliver our services. By using our services, you agree to our use of cookies.