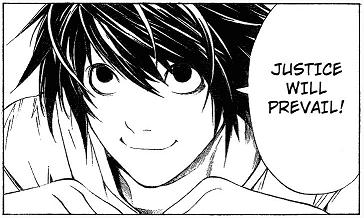 The underlying principle of all series on the idealistic end of the Sliding Scale of Idealism Versus Cynicism: the good guys will always win in the end. Most of the drama in the show comes from the sacrifices they will have to make to this end, and sometimes from their lack of faith in this principle, though usually The Hero, The Love Freak, The Mentor or The Messiah will be there to serve as an endless supply of optimism for the ultimate victory of their cause.

May come as a package deal with Right Makes Might, but not necessarily. If the show is idealistic enough or targeted to a very young audience, Justice Will Prevail without a single drop of blood being shed—indeed, justice usually prevails with the aid of karma, and the heroes won't actually have to beat anyone into submission. If its cynical enough, the word 'justice' becomes propaganda that both sides of a conflict use to justify violent/controversial/misc shade of grey actions.

Compare For Great Justice, when this is explicitly stated in the opening, narration, or cutscenes.

Contrast Concepts Are Cheap, for when this is just thrown in dialog, without actually meaning much.

Examples of Justice Will Prevail include: