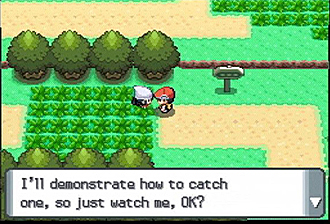 As games become more and more complex and the basic functions required become more numerous, players become less interested in reading through 20+ pages of manual just to find out how to open the inventory. For that reason, game designers are increasingly relying on integrated tutorials to tell the player what to do as he plays through the early parts of the game.

One way of doing this is to have the characters tell the player how to do his thing throughout the game, but if the protagonist is some kind of soldier or otherwise trained character it rather spoils the game's atmosphere to make him look like a rookie. It's even worse when the protagonist is being told stuff he already knows, and the designers couldn't think of a way to work in a tutorial.

To this end, the Justified Tutorial provides a special in-continuity tutorial section which allows the character to "train" or learn his stuff without it looking too forced. Sometimes these sequences are integrated into the start of the game; in others, they are optional from the menu. In either case, they are part of the game's universe rather than being self-contained tutorials.

The in-game tutorials are sometimes dependent on the difficulty setting, meaning that they aren't present in higher difficulty playthroughs.

Examples of Justified Tutorial include:

Retrieved from "https://allthetropes.org/w/index.php?title=Justified_Tutorial&oldid=1835551"
Categories:
Cookies help us deliver our services. By using our services, you agree to our use of cookies.