Everything About Fiction You Never Wanted to Know.
Jump to navigation Jump to search
/wiki/Kaiser Chiefscreator 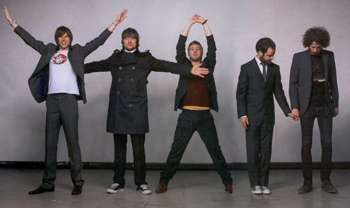 Kaiser Chiefs are an indie rock band from Leeds, England, formed in 1996 as Runston Parva, then changed to just Parva; however, after their record deal fell apart with a single album due to the label's closure, they decided to start from scratch and rechristened themselves with their current name, with which they would achieve international success.

Their sound draws much inspiration from New Wave and post-punk, while adding touches of other styles of rock along the way.

I tell you what it's going to be like
No, you can never hold my hand in public
They can't know or understand
That you and me are now together