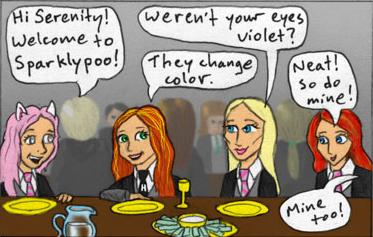 Somebody calls you, you answer quite slowly,


A girl with kaleidoscope eyes.
—The Beatles, "Lucy in the Sky with Diamonds"

Eyes say a lot about a person. Both Common Eye Colors and Uncommon Eye Colors already give a sense of character from the moment you see them, often with Mismatched Eyes for the particularly odd ones. But some characters don't subject themselves to one particular set of eyes. Oh, no, they have a range of colors and combinations, sometimes linked to their emotional or mental state. Their eye color might change with their mood or their particular personality, giving a visual cue of what's going on in their head at the time. People rarely stop and think about how a fully functional "Mood Ring Eyes" would negatively impact the possessor's lives. She would never be able to lie about her feelings or secrets. Any crush, any secret resentment, any boredom during somebody's story, would instantly and undeniable be aired.

Are you writing an original character for Fan Fiction? Here's a bit of advice: be careful and consistent with this trope if you want anybody else to take the character seriously. Unless there's justification within The Verse for the character's race or ethnicity, this is often lumped as a Mary Sue trait.

Sometimes referred to as Mood Ring Eyes, this trope refers to when the character's eyes change on their own. Minor sight gags (har, har...) such as Blank White Eyes don't count and neither do contacts. This refers to when a character's eye color is subject to change on its own for more than just irrelevant emphasis on a particular moment.

Ethereal or otherworldly characters tend to have this trait. Glowing Eyes of Doom and Dull Eyes of Unhappiness are subtropes of this. Compare Kaleidoscope Hair, for the same thing in a different place.

In Real Life, human eyes can appear to change color, but it's usually in response to the lighting and/or the colors nearby; emotion only has an effect if the person's eyes are watery from sadness, anger, or joy, or if the dilation of the pupil makes the eye look darker or paler. Extremely pale blue or gray eyes may also show some variation depending on the blood flow to the iris. However, in almost all cases, the change is very slight—gray eyes may look more blue-gray or greenish-gray in certain lights, or flecks in the iris may become more or less visible. Dramatic changes like blue to hazel are practically unknown.

Examples of Kaleidoscope Eyes include:

Leaving out the obvious Mary Sues, we have examples such as:

Her eyes were likewise neither wholly blue nor wholly grey, but of shifting colors and dancing lights and clouds of colors he could not define.

[...]his eyes were something else again. As he strode towards her, they glittered, seeming to change colour from moment to moment – first an honest brown of earth and nature, then a peaceful green of inner strength and eternal hope, then finally a piercing electric blue.