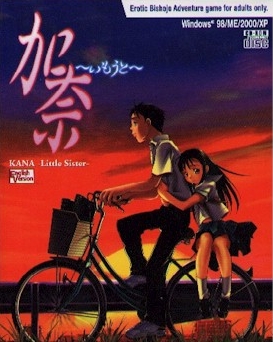 Kana: Little Sister (Kana ~Imouto~) is a Visual Novel depicting the story of 15-year-old Kana, a girl who suffers from a chronic life-threatening disease and her older brother, Takamichi (Taka), who supports her and cares for her. The game deals with the relationship between both siblings, which gets more and more intense as time progresses. There is a clear incestuous element later, but which goes far beyond mere physical attraction.

The game has a fairly long history, with its first release by D.O. in 1999. It caused quite a splash in the industry by combining a typical Dating Sim outline with very dramatic plot elements. This went so far that the actual sex scenes are few and far between, and are used more for narrative purposes than for titillation. This resulted in the trend of drama in dating sims becoming increasingly more important than the pornographic scenes, with often full-blown Tear Jerker content and Melodrama. Games of this type are often named "Utsu-ge" in Japanese, meaning "depressing game", which fits the contents nicely.

Despite being filled to the brim with the cliches that make the genre infamous, the game still has a compelling plot, helped along by Taka's thoughtful narration. It is through his eyes that we see the story unfold, starting in the past, when he and his sister were children. The game covers a time period of about 10 years, in which the characters grow and have to make (sometimes tough) decisions.

Tropes used in Kana: Little Sister include:
Retrieved from "https://allthetropes.org/w/index.php?title=Kana:_Little_Sister&oldid=1610536"
Categories:
Cookies help us deliver our services. By using our services, you agree to our use of cookies.