Everything About Fiction You Never Wanted to Know.
Jump to navigation Jump to search
/wiki/Kanye Westcreator 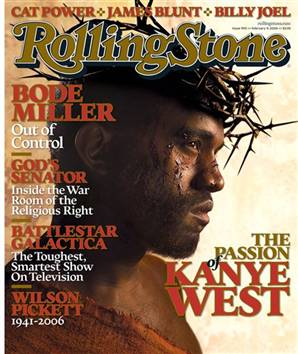 Kanye died for your sins.

Kanye West (1977-) is an American hip hop artist from Chicago [born in Atlanta]. Originally a producer for Jay-Z's Roc-A-Fella Records, he started releasing his own music in 2004 with the Grammy-winning College Dropout. Some of his music videos reference and describe his experiences in the South Side of Chicago, including a music video where he rapped in front of a Harold's Chicken restaurant.

Some know him for his controversies. Some of his actions that some may consider egotistical have arguably garnered more attention than his music. His polarizing line from 2005, "George Bush doesn't care about black people" was one example. And then there was--

*Ahem.* As we were saying, there was also the infamous incident at the 2009 MTV Video Music Awards, in which he brusquely interrupted Taylor Swift's acceptance speech for winning Best Female Video with the above quote. Reporters, talk shows, and the Internet in general had a field day with this, and several people today (including Barack Obama) still won't let him off the hook.

ONE OF THE BEST ARTICLES OF ALL TIME!

Retrieved from "https://allthetropes.org/w/index.php?title=Kanye_West&oldid=1919658"
Categories:
Cookies help us deliver our services. By using our services, you agree to our use of cookies.