Everything About Fiction You Never Wanted to Know.
Jump to navigation Jump to search
/wiki/Karen Gillancreator 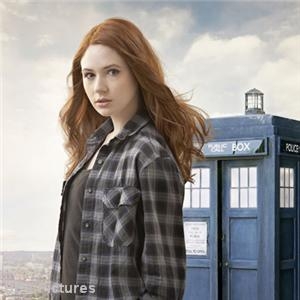 "Funny, clever, gorgeous and sexy. Or Scottish, which is the quick way of saying it."
—Steven Moffat

A 24-year-old Scottish actress, who you'd probably never heard of before, unless you watched The Kevin Bishop Show.

You've probably heard of her now, though - she plays Amy Pond, the first companion of Matt Smith's Eleventh Doctor in Doctor Who, having previously appeared as a soothsayer in an earlier story, "The Fires of Pompeii".

Not related to Ian Gillan of Deep Purple. And no, she's not Felicia Day's long-lost twin sister.

The fans gave her a very warm welcome.

Currently working on the start of Series 7 of Doctor Who where she and Arthur Darvill are scheduled to resume being Companions for the first 5 episodes before leaving for good. Technically, their characters "left" in the late Series 6 episode, The God Complex, but they still managed to appear in all 3 episodes between then and the Series 7 premiere. At 2 1/2 seasons, Karen is the single longest lasting Companion on the show since the start of NuWho.