Everything About Fiction You Never Wanted to Know.
Jump to navigation Jump to search
/wiki/Kenny Everettcreator 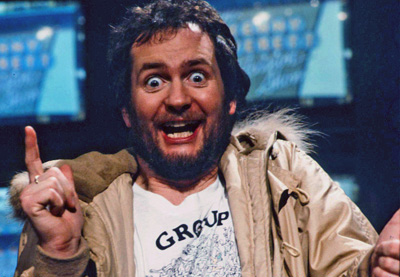 He began his career in show business on the British pirate radio station Radio London in 1964, where he first adopted his Stage Name as an alias to avoid legal problems. (He had actually been offered a job at the BBC as a presenter on the BBC Light Programme on the basis of an audition tape, but declined it in favour of the less constrained world of pirate radio.)

He almost immediately began the pattern of firings and re-hirings that characterized much of his career when in 1965 he was sacked after some outspoken remarks about religion on air. (Like most British pirate stations of the period, Radio London carried American evangelical shows and Everett's disparaging remarks about one caused its producers to threaten to withdraw their lucrative contract with the station.) For more than a decade and a half he bounced back and forth between the BBC and other radio outlets, including Radio Luxembourg and Capital Radio, one of the UK's first commercial radio stations -- sometimes voluntarily, and sometimes not. He was sacked several times for spontaneous quips made on the air (although in at least once case the true cause was political and the quip was merely an excuse). For many years he was forced to prerecord his shows so that they could be reviewed and if necessary censored before broadcast.

During this time he refined and expanded his trademark style, incorporating surreal comedy characters, jingles and sketch comedy into his DJ routine. Along the way he became friends with numerous figures in the music industry, among them The Beatles, whom he accompanied on their August 1966 tour of the United States; he also produced their 1968 and 1969 Christmas records. He also became close friends with Freddie Mercury of Queen after they met in 1974, and was instrumental in getting "Bohemian Rhapsody" released as a single in 1975. (While they were never lovers, they were deep, close friends, Everett becoming an advisor and mentor to Mercury during the 1970s, and Mercury was Everett's confidant, helping Everett to accept his homosexuality.)

Although he had made the occasional television appearance starting in 1965 and including a four-year stint as an announcer on the game show Celebrity Squares, it was in 1978 that London's Thames Television offered him a new venture which would eventually carry his fame across the Atlantic to the United States: The Kenny Everett Video Show. This program, along with its successors The Kenny Everett Video Cassette and The Kenny Everett Television Show, gave Everett an entirely new dimension in which to expand his comedy, and allowed him to create the iconic characters for which he is best remembered today.

During and after these shows he still maintained a presence on British radio -- and still regularly got fired for things he said on the air. One of the most infamous was the 1982 comment, quoted above, which got him booted from BBC 2. However, starting in 1984, he managed to stay on Capitol radio for ten years, only ending his on-air presence in 1994 when his declining health made it impossible for him to continue.

Everett married the singer and psychic Audrey Lee "Lady Lee" Middleton in June 1969. By September 1979, they had separated, and in the mid-1980s, he publicly acknowledged his homosexuality. One of his first boyfriends, a waiter called Jay Pitt, was found for Everett by his wife.

Everett was diagnosed as HIV positive in 1989, and he made his condition known to the public in 1993. He died from an AIDS-related illness, in the Chelsea and Westminster Hospital, London, on 4 April 1995, aged 50.

The following is a list of the main shows Everett presented.

In 1981, Everett co-wrote a semi-fictitious autobiography entitled The Custard Stops at Hatfield. It was published by Willow Books, William Collins, Sons, in September 1982.

Everett is the subject of a 1997 episode of the Thames Television series Heroes of Comedy which covered his life and career from his beginnings on pirate radio up until his death. Celebrities such as Steve Wright, Cliff Richard, Cleo Rocos, Barry Cryer, Jeremy Beadle, Terry Wogan and Barry Took appear and talk about their experiences, collaborations and friendships with Everett and his influence on them.

In 2000 he was the subject of a 30-minute mini-documentary entitled The Unforgettable Kenny Everett.

On 18 November 2007, ITV1 broadcast a tribute show to Everett entitled Licence to Laugh. This celebrated the 30 years since he first appeared on ITV with The Kenny Everett Video Show (Thames Television). Friends and colleagues revealed what it was like to know and work with the man they affectionately dubbed "Cuddly Ken". Additionally, contemporary celebrities such as Chris Moyles and Chris Tarrant talked about their love for the outrageous entertainer and discussed the ways in which Everett had influenced them and their work. It also featured archive footage.

The documentary When Freddie Mercury Met Kenny Everett, broadcast on Channel 4, tells the story of the relationship between the two men from the moment they met in 1974 when Mercury was a guest on Everett's radio show, through gay lovers and drug use to when both died of AIDS. It features affectionate interviews by many people who were close to him.

In March 2010, the BBC confirmed that it was producing a 90-minute TV biographical film called Number One in Heaven, to be written by Tim Whitnall and focusing on Everett's unhappiness at secondary school.

Retrieved from "https://allthetropes.org/w/index.php?title=Kenny_Everett&oldid=1919080"
Categories:
Cookies help us deliver our services. By using our services, you agree to our use of cookies.