Jump to content
Everything About Fiction You Never Wanted to Know.
/wiki/Kevin Spaceycreator 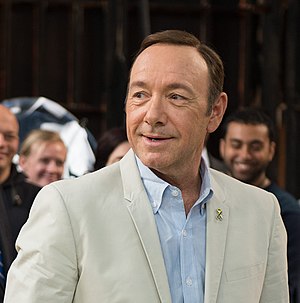 Kevin Spacey, CBE (born Kevin Spacey Fowler; July 26, 1959) is an American actor, film director, screenwriter, and film producer. He began his career as a stage actor during the 1980s, before being cast in supporting roles in film and television. He gained critical acclaim in the early 1990s, culminating in his first Academy Award for Best Supporting Actor for The Usual Suspects (1995), followed by an Academy Award for Best Actor for American Beauty (1999).

In October 2017, actor Anthony Rapp accused Spacey of making a sexual advance toward him when Rapp was 14. In the wake of Rapp's accusation, numerous other men alleged that Spacey had sexually harassed or assaulted them. As a result, Netflix indefinitely suspended production of House of Cards, and opted to not release his film Gore on their service, about the writer Gore Vidal. Spacey was also replaced by Christopher Plummer in Ridley Scott's film All the Money in the World.

Spacey came out as gay in his apology to Anthony Rapp, but his apology was criticized as an attempt to change the subject.

Retrieved from "https://allthetropes.org/w/index.php?title=Kevin_Spacey&oldid=1849246"
Categories:
Cookies help us deliver our services. By using our services, you agree to our use of cookies.