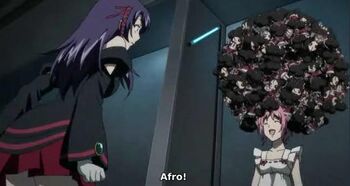 There is nothing we could tell you that this screenshot wouldn't explain.

"W-what the hell was that all about? It was like a shitty sitcom."
—Belle

Kiddy Girl-AND is a 2009 Spin-Off of the popular series Kiddy Grade. The series opens with the main characters of the first series make a brief cameo before being ambiguously vaporized trying to save the universe from a vaguely established threat. After this bit of extreme closure the show jumps leads to a new pairing and takes a sharp turn for the absurd. The new main characters are Ascoeur, a slightly unhinged waitress, and her unflappable partner, Q-feuille, who are training to become ES members. Thus begins a self-parodying romp that feels like a permanent day at the bizzaro in the Kiddy Grade universe full of Panty Shots, swapped voice actors, mecha-dragons armed with light sabers, and pudding. Grab your popcorn, recite the troper's prayer three times, and get ready for the Kiddy Girl experience.

Tropes used in Kiddy Girl-AND include:
Retrieved from "https://allthetropes.org/w/index.php?title=Kiddy_Girl-AND&oldid=1733641"
Categories: