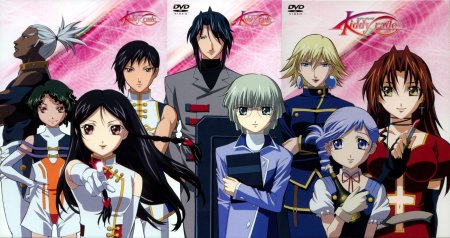 In the Star Century year 0165, humanity has long spread across the galaxy and brought all it's old problems with it. Crime rates in the future are still as high as ever. An agency of the Galactic Union called "Galactic Organization of Trade and Tariffs" (GOTT) has its own special way of dealing with these problems - it dispatches duos of superpowered enforcers referred as "ES Members" to deal with galactic law breakers. Among their number are two who... tend to stand out a bit: Éclair and Lumière. Behind their appearance of just your run-of-the-mill, happy-go-lucky C-class agents lurks a far more sinister past soiled with blood, desperation, and bitter conflict with the very world order they are now charged with protecting.

Does the above sound like a bit like Dirty Pair to you? No surprise, seeing how Kiddy Grade was probably intended as its Spiritual Successor of sorts. However, despite its lighthearted, Lovely Angels-themed start, this show gets progressively darker and moodier, dipping into such difficult themes as problems faced by an immortal and person vs. society and socioeconomic conflict. Kiddy Grade is a true production tour-de-force, starting with the design, directorial and dictational talent of production team gímik, throttled by the GONZO animation prowess and impressive voice acting (yay for Aya Hirano and Colleen Clinkenbeard), rounded off by an impressive musical score by Shiro Hamaguchi. This will make the series worth taking a look at even if you stay indifferent to the questions raised in it.

The show originally aired in Japan in 2002-03. A sequel series was announced in 2006, to be animated by asread rather than GONZO, and while a pilot DVD was released, little info was revealed until February 2009, when it was re-announced under the official title Kiddy Girl-AND, now to be animated by Satelite and set 50 years after the original. In the interim, the series had been re-run on TV in Japan and re-released as a DVD box set, and also released to selected theatres as three cut-down movies.

Note: Kiddy Girl-AND has its own page, so please don't put tropes relating to that show here.

Tropes used in Kiddy Grade include:
Retrieved from "https://allthetropes.org/w/index.php?title=Kiddy_Grade&oldid=1899654"
Categories:
Cookies help us deliver our services. By using our services, you agree to our use of cookies.