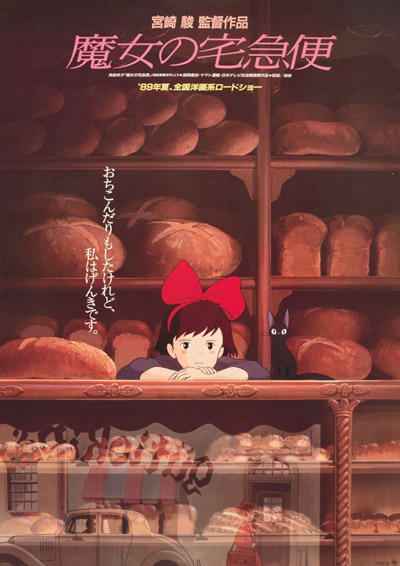 Trust us, that's not a sign that the movie is boring.

It's one of our oldest customs that when a witch turns thirteen she has to leave home for a year to begin her training.

Kiki's Delivery Service (Majo no Takkyubin / 魔女の宅急便 in Japan) is a Hayao Miyazaki film from Studio Ghibli based rather loosely on an illustrated novel by Eiko Kadono. Kiki is a witch who has just recently turned 13, which means it's time for her to strike out on her own. Heading "south towards the ocean" she soon finds a town that does not yet have a resident witch of their own and tries to establish herself, only to be lost in the sights and wonders the big city has to offer. As she tries to cope with city life it's pretty clear that her witch powers still need some fine tuning. She quickly befriends a baker who temporarily employs her to make a delivery, which Kiki makes using the only power she has -- flight, via broom. Inspired by her initial success, she establishes an independent delivery service in the attic of the baker's shop. As time goes on and her business gains success, she continues to refine her magical skills and befriends a young boy from a local aviation enthusiasts' club. Despite the magical setting, however, Kiki's real adventures mainly revolve around the trials and tribulations of a normal adolescence.

The setting of Kiki's Delivery Service is intentionally ill-defined, a Europe where WWII apparently never happened that was inspired by Napoli, Lisbon, Stockholm and Paris. A very laid-back, Slice of Life animated movie, it nonetheless is thoroughly enjoyable and gorgeously executed -- and unlike many Slice of Life works, actually manages to have an exciting, action-packed climax at the end. It also depicts more people laughing out of sheer delight than any other film of recent memory.

This was Disney's first effort at localization, nearly 9 years after the movie first came out. They produced a dub with some celebrity voices (including Kirsten Dunst and Phil Hartman in his last voice acting role ever), with additional pieces of music (mostly piano solos, as provided by Paul Chihara). The opening and ending theme songs -- two iconic Japanese pop songs from the 1960s -- were also replaced for the dub with two "American pop"-style songs by Sydney Forest. This release of the film sold over a million copies on VHS and a later bilingual DVD was met with similar success, cementing the film's popularity in the U.S. A 2010 re-release of the film removed much of the ad-libbed Phil Hartman dialog (in particular, a controversial line added to the end of the film) and also reverted the musical track to the Japanese songs and music.

Interestingly, the film might have been never produced at all owing to Yamato Transport Co. Ltd's objection to the use of their copyrighted term "Takkyuubin" -- which Kadono had appropriated without permission -- along with their black cat trademark. (Takkyuubin was the term Yamato Transport coined for their guaranteed overnight delivery service and the logo is a black cat carrying a kitten.) Miyazaki cleverly solved the problem by convincing the company to sponsor the film. Presumably Yamato was pleased by the resulting bonanza of free publicity.

Another little-known fact is the alternate dub produced by Carl Macek and commissioned by Japan Airlines for in-flight entertainment. Unlike Macek's similar dub of Miyazaki's My Neighbor Totoro the Streamline Pictures version was never licensed for official release in the North American market.