Kill It with Water 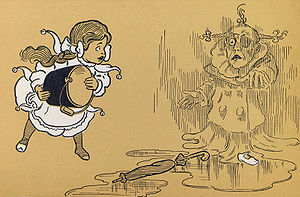 The Wicked Witch has been H2Owned.

So you're fighting an unstoppable behemoth, and everything you throw at it just bounces off its skin. You and your companions run, but it's slowly tearing the place apart around you...

...until, in desperation, you throw your bottled Water at it, causing it to turn to dust instantly. What just happened? Did something else disintegrate it? Was it really a pushover this whole time and you just need to take a refresher course somewhere besides the Imperial Stormtrooper Marksmanship Academy?

No (well, not only)! You've just faced down an enemy with a rather unfortunate Kryptonite Factor, one covering 70% of the planet, and the solution was always just to Kill It with Water.

Unlike Kill It with Fire, this strategy doesn't tend to be viable if you're fighting an opponent who doesn't specifically have a Kryptonite Factor to water... unless you use an unbelievable amount of it, then it's rather effective. Or you could try making it colder.

Woe betide someone with this weakness who goes up against a character fond of Making a Splash. Frequently a Weaksauce Weakness, may be counteracted with a Kryptonite-Proof Suit. Could be prevented if waterproofing existed. Can lead to an understandable case of Kryptonite Is Everywhere, because, well...it's water.

In video games, this often appears as a manifestation of Elemental Rock-Paper-Scissors. Consequently, beings with an affinity for fire are often unfortunately prone to this trope.

Examples of Kill It with Water include:

Riza: Colonel, you're useless under the rain!