Everything About Fiction You Never Wanted to Know.
(Redirected from Killer DM)
Jump to navigation Jump to search 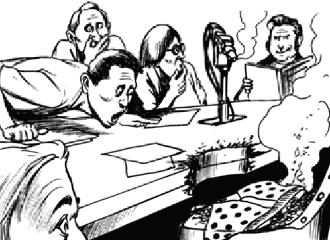 Never argue with the GM.

Attendant: How do you deal with players who try to break the game?
Gabe: Lie to them. Rob them. Drive them mad. Concoct impossible scenarios whose only outcome is their death.


And then, when their eyes glisten with shame and rage, drink their tears.
—Penny Arcade

Opposite to the Monty Haul Game Master who heaps rewards by the truckful upon his players, the Killer Game Master has set himself up as a hostile entity playing against them. To this guy, it hasn't been a good day until the players have been forced to roll up several new characters in a single session. In short, this Game Master subscribes to the Amber Law of gaming; the game session is a zero-sum battle of wits between players and GM, and the GM holds all the cards. For exactly this reason, the Killer Game Master is in most cases considered the worst example of what a Game Master shouldn't be. Since the GM has the ability to kill off the entire party at will at any time, his "winning" such a battle is hardly an accomplishment.

Any world in his hands will inevitably turn into a Crapsack World where every innocent-looking item will turn out to be a Death Trap which kills the player without so much as a saving throw, every magic item they pick up will be cursed or even worse, they can't trust any NPC (especially the friendly ones), and their every deed will lead to miserable failure or end up helping the forces of Darkness (or Light, if your band of adventurers is a bunch of evil doers). They won't be crushing orcs or goblins at level one, they'll be getting stomped by ancient red dragons and tarrasques. And frequently, they'll have to make Dexterity checks to avoid randomly tripping and falling down.

If there are paladins or other characters who depend on a certain alignment, this may also extend to making such characters "fall" for such small things that it effectively becomes impossible to actually stay a character of this type for very long. An example of this would be loss of Paladinhood for even the smallest non-combat interaction with an evil character, whose alignment is only revealed after you lose Paladin abilities, as the Paladin code forbids association with characters that you know are evil. Another common 'Killer DM' response to Paladins is to place them in a situation where the paladin must commit an evil act or die/cause the end of the world. You can tell if this is the work of a 'killer' if the Game Master actively torpedoes any attempt to Take a Third Option.

The simplest and most brazen of these will simply collapse the dungeon on the players the moment they enter it. The more subtle have a habit of making life for the average Player Character a living hell where he will perpetually suck. Going Off the Rails is your only hope, and even then you should keep an eye out for falling rocks. If the players are competent enough minmaxers (or if the group sports a bona-fide Munchkin—actually, a Killer Game Master is what happens when a Munchkin becomes a Game Master), this kind of DM may be necessary just to give them a challenge. Conversely, of course, these kinds of game masters can actually inspire Min-Maxing in their players, as they feel they need to do so just to survive a given DM's game.

Some of the oldest Dungeons & Dragons modules seemed to encourage this sort of trial-and-error, Nintendo Hard gameplay, such as the infamous Tomb of Horrors. The late Gary Gygax, one of the two creators of D&D, was often accused of viewing the game as a competition between players and DM, when in actuality, he counseled against the Killer Game Master approach in the various D&D manuals, and the "meat-grinder" dungeons that he made were designed for use in tournaments, where the winning team was the one that survived the dungeon with the most characters still standing. Sometimes, entire game settings lend themselves to games where a Total Party Kill is not a question of if, but when.

Examples of Killer Game Master include:

Marx: Well, in this case. I think I'll run this premade adventure module, instead of the one I made...
Marx: It's called "The Crypt of Kill All Your Players' Stupid Characters In The First Battle So They'll Make Proper Characters Next Time". I think you will all enjoy it.

As you can see I soon realized that Psycho Dave ran a game in roughly the same way that Warwick Davis in the film Leprechaun granted wishes. Everything you said your character did was scrutinized for some way to screw you over and the dice ruled all. He was the only guy I know who used a random monster encounter chart for Call of Cthulhu (tabletop game). You haven't lived until you've had a character go mad because he saw a nightgaunt sitting in a restroom stall reading a copy of the Necronomicon.

In addition to making the players roll for everything as described above, he also considered the Arduin Grimoire critical hit tables (where it is not uncommon to lose three limbs, among other things) to be coddling the players. Considering the content of the campaign, quick death might be a mercy.