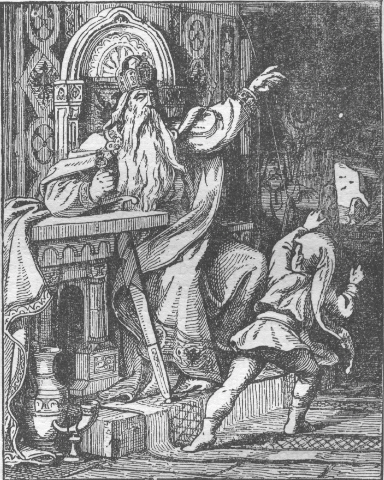 Frederick Barbarossa stirs, sending a boy to see if there are still ravens flying about the mountain; he will wake when there aren't.

A legendary form of Faux Death: the King (The Hero) is not really dead, but asleep. Usually, but not necessarily, under a mountain. Islands and a Magical Land are other possibilities. At any rate, somewhere difficult to access.

He will come again when it is his country's hour of need. The original folk-loric motif generally referred the hero's awakening to The End of the World as We Know It; the rise of nationalism altered the focus from the entire world to merely the nation.

See also Awakening the Sleeping Giant, which comes into play when it does happen; while not technically neutral, they are effectively so because they are not in the fray. Sister Trope to Sealed Good in a Can and Sealed Badass in a Can; they overlap in those rare stories where the king does wake. Compare Sealed Evil in a Can. Compare Rip Van Winkle.

Examples of King in the Mountain include:

Retrieved from "https://allthetropes.org/w/index.php?title=King_in_the_Mountain&oldid=1895775"
Categories:
Cookies help us deliver our services. By using our services, you agree to our use of cookies.