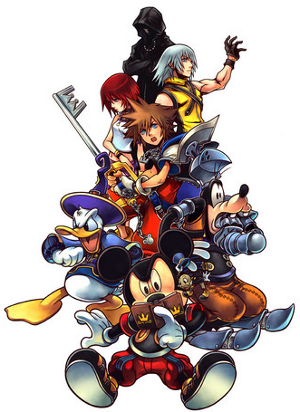 Kingdom Hearts coded (yes, that is exactly how it is capitalized and punctuated) is set after the events of Kingdom Hearts II. While organizing the records in his journal from his travels with Sora and his friends, Jiminy Cricket's curiosity about the line "thank Naminé" results in him finding a message that he did not write: "Their hurting will be mended when you return to end it." To investigate this message, King Mickey digitizes the contents of the journal and goes into the simulated world to investigate, awakening a virtual Sora on Destiny Islands to carry out the contents of the journal to uncover the identity of "them". However, the virtual Sora encounters "bugs", which take the form of red and black blocks. The plot takes the data Sora through seven worlds from previous games.

Kingdom Hearts Re:coded, a remake for the Nintendo DS, has been released in Japan and America and now Europe.

Tropes used in Kingdom Hearts coded include:
Retrieved from "https://allthetropes.org/w/index.php?title=Kingdom_Hearts_coded&oldid=1855479"
Categories:
Cookies help us deliver our services. By using our services, you agree to our use of cookies.