Everything About Fiction You Never Wanted to Know.
(Redirected from Kirby and The Amazing Mirror)
Jump to navigation Jump to search 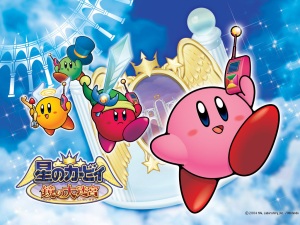 The pink puffball's second outing on the Game Boy Advance, Kirby & the Amazing Mirror shifts from the standard linear platformer norm to a sprawling Metroidvania game with optional cooperative multiplayer.

The game is essentially what you get if you throw the Metroidvania genre in a blender with The Legend of Zelda Four Swords and the Kirby franchise. The player must traverse a maze of nine interconnected areas, finding the maps for each, pressing buttons to connect them to the Hub Level, and defeating their bosses to collect the eight Mirror Shards to restore the Amazing Mirror, the path to the Final Boss. While you're doing that, the other three Kirbys are off on the adventure too, and you can call them by mobile phone at any time to help you fight enemies or solve puzzles which need an extra Kirby or two; the game also has a multiplayer mode which is pretty much the same thing except other players fill the roles of the other Kirbys.

Kirby & the Amazing Mirror is one of the ten Game Boy Advance games to be available to participants in the Nintendo 3DS Ambassador Program, due for limited re-release to early adopters of the Nintendo 3DS for free on its eShop in December 2011.

Tropes used in Kirby & the Amazing Mirror include:
Retrieved from "https://allthetropes.org/w/index.php?title=Kirby_%26_the_Amazing_Mirror&oldid=1592986"
Categories: