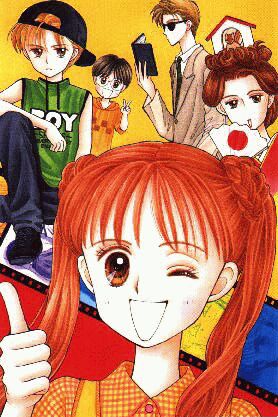 Despite her fame and her career, eccentric 11-year-old child actress Sana Kurata lives an almost normal life with her even-more-eccentric author mother, Misako Kurata, and her manager Rei Sagami. She even attends a public school, where she has many friends. But in school she comes into conflict with sullen, laconic Akito Hayama, de facto leader of the boys in her classroom.

Akito holds some secret blackmail on two of the teachers, allowing him to get away with a great deal of misbehavior -- something which enrages Sana, especially when it disrupts the class. She vows to defeat Akito, and restore peace to the school. After several failures, she succeeds in beating Akito at his own game, but her victory over him is just the beginning of a surprising evolution of her relationship with the quiet, angry-seeming boy, as she discovers why is he so angry and starts trying to fix it...

Kodomo no Omocha ("Child's Toy", and frequently contracted to "Kodocha") is a fun, entertaining Shojo series that mixes comedy and drama in equal parts. Sana's irrepressible energy and rapidfire dialogue is second only to Excel of Excel Saga for its speed and outrageousness. (In fact, Excel's original North American voice actress, Jessica Calvello, once expressed an interest in voicing Sana in English.) But unlike Excel, Sana is a force to be reckoned with, despite her non sequiturs and baffling leaps of "logic". Possessed of an immense empathy and a willingness to help even someone she characterizes as her worst enemy, she plows through troubles and problems with a bold determination and a choice of skills from the acting school she attends. It has frequently been described as "Marmalade Boy on crack" due to Sana and Akito's superficial resemblance to Miki and Yuu.

An extra note of surrealism is added above and beyond that which normally surrounds Sana by the presence of Babbit -- an albino bat who acts as a Narrator and Greek Chorus for the show. In addition to his other schtick, Babbit is quite aware that he and the other characters are in an anime, and sometimes upbraids Sana and her friends for doing things they shouldn't on TV.

As of August 2005, FUNimation has begun releasing licensed DVDs of Kodomo no Omocha in North America under its abbreviated title, Kodocha. The dub of the first DVD had been censored heavily, but it stopped by the next release. Additionally, the original opening credits from the first season have been replaced with the second season credits because of legal pressures exerted by the recording company behind Tokio, the group who recorded the original theme song, 7 O'clock News. A cameo appearance by a member of Tokio in the first episode has actually been bowdlerized in both English and Japanese to keep any mention of the group out of the North American release. Any audio relating to Tokio in the Japanese track is completely muted, including the 'next episode' previews in the first 16 episodes, which have Tokio's 7 O'clock News playing in the background. The second half of the series has yet to be released.

Tropes used in Kodomo no Omocha include:
Retrieved from "https://allthetropes.org/w/index.php?title=Kodomo_no_Omocha&oldid=1773654"
Categories: