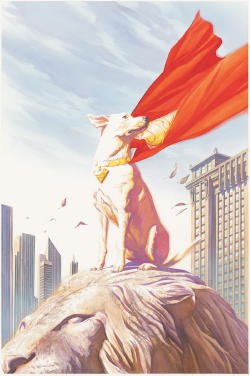 Wait... this is one of those where writing the trope as the character probably won't work.

Krypto the Superdog is Superman's pet canine, a white dog of indeterminate breed who like his owner also survived the explosion of Krypton. He was created by Otto Binder and Curt Swan, first appearing in Adventure Comics #210 (March, 1955). In the original Silver Age origin story, Krypto was the El family dog on Krypton, and was used by Jor-El as a test subject for his work on the escape rocket he was building for Kal-El. The experimental rocket Krypto was put in, however, got knocked off-course, and Krypto drifted (presumably in some sort of suspended animation) for years before eventually winding up on Earth, reunited with the now-teenaged Superboy. Being from Krypton, of course, gave Krypto a dog-sized version of Superboy's/Superman's powers and roughly human level intelligence (albeit with a dog's sense of priorities), which he used to help his owner fight crime.

Krypto was the first major Silver Age addition to the Superman mythos (the succeeding years would see other familiar elements, such as the Fortress of Solitude, the Phantom Zone, Supergirl, etc. added). He regularly appeared in Superboy stories from 1955 to 1970. In 1959, he was introduced to stories depicting the adult Superman. Regularly appearing to 1970. He was then dropped for a few years. Before revived in 1974. The Seventies were arguably his heyday, with Krypto getting solo stories in the pages of Action Comics, Superman, and Superman Family. The New Adventures of Superboy (1980-1984) at times depicted Krypto along Superboy. But this was the end of the original version of the character.

Post-Crisis, Krypto was at first eliminated from continuity, but (after a few short-lived characters with the same name were introduced) was brought back in the early 2000s as Superman's pet dog again, this time described as having come from an alternate-reality version of Krypton. This version needs considerably more maintenance considering he has only a regular canine level intelligence, which means he can be carelessly destructive and in combat, he will instinctively fight with all his strength without regard of the nature of the opponent.

While Krypto's first animated appearance was as Superboy's sidekick in the mid-60s Filmation-animated Superboy cartoons, Krypto received his own animated series in 2005 titled Krypto the Superdog. In this series, Krypto was allowed by Superman to live with a suburban Metropolis boy and his family, and had adventures alongside other characters such as Ace the Bat-Hound and Streaky the Supercat.

Tropes associated with Krypto include:
Retrieved from "https://allthetropes.org/w/index.php?title=Krypto_the_Superdog&oldid=1727178"
Categories: