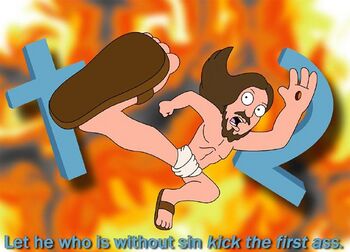 A New Media and comedy trope in which Jesus (or any other similar Messianic Archetype or Crystal Dragon Jesus figure) is depicted doing very, very awesome deeds that somehow were never recorded in the Bible. May involve Jesus being a Badass, or just generally doing something really cool. Has a certain degree of Truth in Television, if you believe in the bible.

Name based on the Exalted fandom and on Avatar the Abridged Series description of Aang as a "Kung Fu Action Jesus". Not to be confused with Something Awful goon and Let's Play aficionado Kung-Fu Jesus.

A Sub-Trope of Jesus Was Way Cool, and also Historical Badass Upgrade.

See also Church Militant and Pals with Jesus. Might go on adventures with Action Santa, or Gandhi II. Push it to the extreme and you got Everybody Was Kung-Fu Fighting.

Examples of Kung Fu Jesus include: