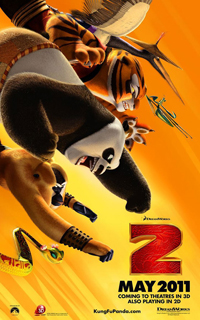 Long ago, a peacock named Lord Shen sought to harness the power of fireworks for a more practical use in weaponry, a cannon. His worried parents, the rulers of Gongmen City, consulted a soothsayer, who foretold that Shen would be defeated by "a warrior of black and white". To prevent this, Shen destroyed an entire nearby panda village, and returned home expecting appreciation, but his parents were struck with horror and exiled him. Shen, however, swore revenge and vowed to return to the city to complete his invention and see that the prophecy would not be fulfilled.

In the present day, Po, now a very skilled Dragon Warrior and the sixth member of the Furious Five, is trying to learn "inner peace" from Master Shifu. They're interrupted when a gang of wolves attack a village in search of metal to help in making Lord Shen's cannon, which, if successful, will make kung fu obsolete. Po and the Furious Five set out for Gongmen City to stop his plans. Along the way, Po learns about how he was adopted, and why.

The 2011 Sequel to Dreamworks Animation's Kung Fu Panda, this film opened only second in line, under The Hangover Part II, at the box office on its opening weekend. The earnings in the U.S. declined in the following weeks, but the international earnings went through the roof, especially in Asian territories, and set a new record in China. As a result, this film is the #1 animated feature film of 2011 worldwide, outgrossing Pixar's critically lambasted Cars 2. Furthermore, it's also the biggest box office earner for a film directed by a woman, in this case, Jennifer Yuh Nelson, who directed the traditionally animated opening of KFP 1.

Tropes used in Kung Fu Panda 2 include:
Retrieved from "https://allthetropes.org/w/index.php?title=Kung_Fu_Panda_2&oldid=1962928"
Categories:
Cookies help us deliver our services. By using our services, you agree to our use of cookies.