Everything About Fiction You Never Wanted to Know.
Jump to navigation Jump to search
/wiki/Kurt Vonnegutcreator 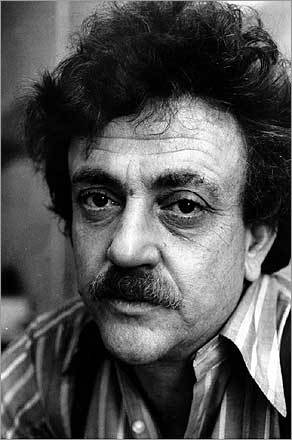 Listen: Kurt Vonnegut (1922-2007) was an American science fiction writer who is known for such works as Slaughterhouse-Five, Cat's Cradle, and Breakfast of Champions. His work is known for its satirical, anti-authoritarian, humanist, and often brutally depressing worldview. If this worldview can be pinned down to one event, it would be the bombing of Dresden.

Vonnegut served in World War II. When in Germany he was captured by the enemy and brought to Dresden. Dresden was a large German town known for its doll-making that had little to no strategic military significance, yet was still fire bombed by the Allies into a smoldering charred pile. So it goes. This event would become a major theme in many of his books, especially the later ones.

Vonnegut is also notable because he was one of the first modern science fiction authors to get serious attention in the literary world. Although your literature professors (and Vonnegut himself) may try to tell you he's not actually a science fiction writer, the aliens and time-travel seem to disagree.

Vonnegut's stories with their own pages

Tropes common in his work

Examples of tropes from his other stories

A Man Without A Country

Retrieved from "https://allthetropes.org/w/index.php?title=Kurt_Vonnegut&oldid=1431480"
Categories:
Cookies help us deliver our services. By using our services, you agree to our use of cookies.