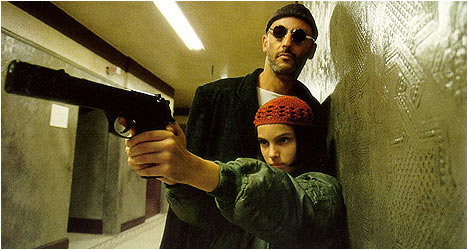 The Professional -- also known as Léon -- is a 1994 film directed by Luc Besson which stars Jean Reno, Gary Oldman, and Natalie Portman in her first major role.

Leone "Léon" Montana (Reno) is a quiet, skilled assassin whose next-door neighbors were just gunned down by drug runners; the only survivor of the massacre is 12-year-old Mathilda Lando (Portman), who begs Léon to save her from the corrupt cops who murdered her family. Léon reluctantly takes Mathilda under his wing and, at her insistence, teaches her in the ways of his trade. Mathilda is intent on avenging her family by going after the Dirty Cop responsible for their murder -- and Léon is intent on keeping Mathilda safe at all costs.

This film is not to be confused with The Professionals (a British TV series) or Le Professionnel (another French film with Jean-Paul Belmondo as its star).

Tropes used in Léon: The Professional include:
Retrieved from "https://allthetropes.org/w/index.php?title=Léon:_The_Professional&oldid=1861629"
Categories:
Cookies help us deliver our services. By using our services, you agree to our use of cookies.