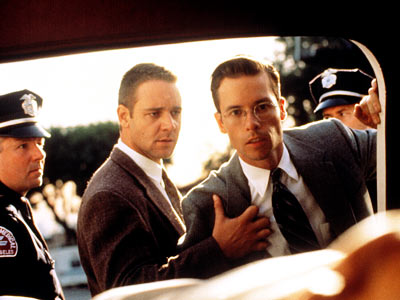 There is a mass murder at The Nite Owl restaurant, including a former LAPD officer. Detectives Bud White, Edmund Exley, and Jack Vincennes all get caught up in the case, which turns out be part of the power struggle in organized crime after Real Life mobster Mickey Cohen is convicted.

The book by James Ellroy was later adapted into a film starring Russell Crowe, Guy Pearce, Kevin Spacey, James Cromwell, and Kim Basinger. It greatly condensed the plot and time frames of the book, but was widely praised for keeping almost all of the drama and noir feel. The movie was named to the National Film Registry in 2015.

Tropes used in L.A. Confidential include:

Coroner: Mrs. Lefferts, does your daughter have any distinguishing marks?
Mrs. Lefferts: She has a birthmark on her hip. It's her. My baby!

Jack: (to Ed) Bud White's gonna fuck you for this if it takes him the rest of his life.

Lynn: (also to Ed): Fucking me and fucking Bud aren't the same thing.

Lynn: Some men get the world. Others get ex-hookers and a trip to Arizona. You're in with the former, but God, I don't envy the blood on your conscience.