Everything About Fiction You Never Wanted to Know.
Jump to navigation Jump to search
/wiki/L. Ron Hubbardcreator 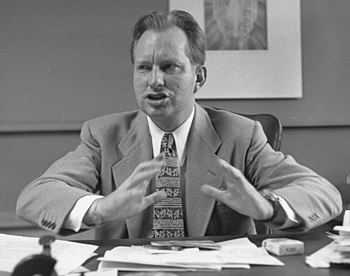 Lafayette Ronald Hubbard was born March 13, 1911, and became first a sailor, then a writer for pulp magazines. He turned to longer work in 1937 with Buckskin Brigades, and was prolific there as elsewhere. He died January 24, 1986, but if certain sources are to be believed, he reincarnated sometime around 2007... See why this entry has been so neutral and bland so far?

Hubbard founded Scientology, otherwise known on this wiki as the Church of Happyology, and for better or worse it strongly influenced his writing and responses to it in three ways: 1) he tended to work it into his later books, sometimes bluntly; 2) the followers who automatically bought his books made him Critic Proof; and 3) the sheer strength of the Hatedom that has sprung up around him, combined with the vehemence of his followers, has rendered it almost impossible to judge his work objectively, although some have tried (not to mention made the mere mention of his name into Flame Bait).

On a lighter note, Hubbard currently[when?] holds Guinness world records for most books published (1,084) and most languages his books have been translated into (71).