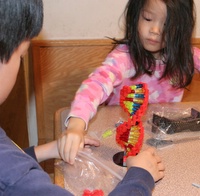 And here's where you add wings!

"Remember, genes are NOT blueprints. This means you can't, for example, insert "the genes for an elephant's trunk" into a giraffe and get a giraffe with a trunk. There are no genes for trunks. What you can do with genes is chemistry, since DNA codes for chemicals."
—Academician Prokhor Zakharov, Sid Meier's Alpha Centauri

With LEGO Genetics, you can fiddle with DNA wherever you like, intentionally or accidentally, and all the cells will change overnight (if that). Just wake up and presto! Wings! Fur! Gills! Hulking muscles! You don't even have to eat the equivalent of your entire body mass to create all those new body parts; the old cells just rearrange themselves like Lego. That part is usually Handwaved if not Lampshaded.

This comes from the way genetics is taught in middle and high school: The double-helix is like a ladder, with the rungs being nucleobases Adenine, Cytosine, Thymine, and Guanine. Each rung fits together, A to T, and C to G. Mix each rung around and presto! You got a tail! This is also how it's portrayed in movies with CG[1] effects showing the double helix spinning around, taking out one rung and putting another in, with the whole thing glowing to show how it's been affected.

This trope gets even stranger when the genes in question come from somewhere besides Earth. DNA is not just "genetic material." It's a specific molecule that we humans, and almost every living thing on Earth, use. It's one of boundless possible candidates for the job. Viruses may use DNA or its sister RNA for their genome, and there have even been some (highly controversial) studies that indicate there may be microorganisms that use Arsenic in their genetic material where we use Phosphorus. There's no reason to think extraterrestrial genetic material should be the same as ours. Additionally, DNA contains lots of special little sequences besides genes. These include viruses that simply hopped onto our DNA and get copied with it (endogenous viruses), sequences which are apparently just "junk" we can't get rid of, and sequences which tell cells how often to turn on each gene and when to shut it down. This also requires that almost all living cells on Earth interpret a gene the same way. That's the genetic code; almost all cells interpret a particular sequence of three "rungs" to mean the same amino acid when they turn the gene on and start making protein. Yet when the plot demands it, an alien has DNA and all the ancillary stuff to compatible with our genetic heritage. That's so absurdly improbable that if an organism from another planet were to have DNA at all, rather than some other possible molecule, most scientists would immediately start wondering if we had a common origin (or scream "Hoax!") In fiction, aliens have DNA and interpret it just as things which evolved on Earth do. No Biochemical Barriers indeed! Just slap it into our cells and away we go making a Half-Human Hybrid and more.

It should be noted that gene therapy, the alteration, addition or removal of existing genes in an adult organism, does really exist. However, it can be more problematic than presented in fiction, and can wear off after a little while. Additionally, it normally requires very complicated surgery (or the use of gutted viruses) to carry out; you can't simply inject some foreign DNA into your blood and wait for the mutations to take place. Addition of genes via plasmids (segments of DNA or RNA transplanted between organisms) also exists; it is how viruses reproduce and how bacteria and small beings can adapt. Human experimentation has reproduced this, but this is limited to adding new traits to cells, that may propogate, but don't form new structures. For more information, try Genetics or The Other Wiki.

Often results in Animorphism, or discussion about how the character is "evolving" or "devolving", because Genetic Engineering Is the New Nuke. See also Magic Genetics and Unstable Genetic Code. Bio Augmentation is a likely application.

Examples of LEGO Genetics include:

"...Two things set synthetic biology apart [from genetic engineering]: The DNA building blocks don't have to come from nature; they can be designed and created in a lab, a process that's becoming faster and cheaper. And there's the idea that life, like cars or computers, can be designed and built from standardized parts that behave predictably." [1]