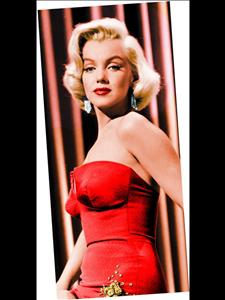 I Dream Of Red!

If a woman is sexy enough, there's a good chance that she will wear a slinky red dress at at least one point in time. If she's really, REALLY sexy, and especially if she's The Vamp or a Femme Fatale, it may become her default outfit. This trope deals with the latter.

Characteristics of the dress will include:

Most of this has to do with the slinkiness of the dress itself. However, red is also the color most commonly associated with sex and passion, so it echoes this woman's sexuality all that more, although she does not have to be an actual scarlet woman. In short, the person wearing the red dress is automatically THREE TIMES SEXIER than a person wearing a less flamboyant color. Bonus points if her hair matches with the dress.

The Glamorous Wartime Singer is often a Lady In Red, as is The Chanteuse.

According to Chinese mythology, a woman who dies in a red dress, or commits suicide in one, is able to come back to haunt those who wronged her. Which leads to a multitude of ladies in red dresses in Hong Kong horror movies. Additionally, in Bollywood and throughout Southeast Asia, red is more associated with marriage and love instead of raunchy sex. Thus, the symbolism of a woman in a red Sari is very different than the Western interpretation.

Sometimes, the dress will be a "Happy Holidays" Dress or Sexy Santa Dress.

Unlike Woman in White, this trope is grown women only; for little girls, see Little Dead Riding Hood and compare Princesses Prefer Pink.

In terms of concept and symbolism, this trope is the polar opposite of the Woman in Black. A Lady in Red is sexy, period. She might be morally ambiguous but she mostly displays a form of sexual availability, a signal that she's ready to fulfill a guy's sexual desires. The Woman in Black may be sexy and enticing but, in sharp contrast to her crimson counterpart, she is also openly menacing and sexually unavailable, especially if her outfit covers her whole body. In any case, the Woman in Black clearly conveys that approaching her is not a good idea, whereas the Lady in Red means to arouse lust.

Examples of Lady in Red include:

Retrieved from "https://allthetropes.org/w/index.php?title=Lady_in_Red&oldid=1847418"
Categories:
Cookies help us deliver our services. By using our services, you agree to our use of cookies.