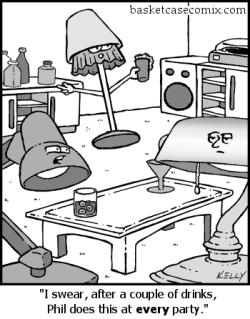 I left Cleveland to get away from His and Her towels, people who call cocktail parties 'pours' and the guy who always breaks it up by wearing a lampshade on his head.
—Time Magazine article on actor Jim Backus, December 15, 1958.

A person getting drunk enough at a party to wear a lampshade as a hat.

It's hard to pin down the origin of this trope. One theory is that the guys get drunk enough to mistake lamps for hat racks. If that's true, this trope could be Older Than Television. Another theory is a citation on this web page, the idea of a drunk wearing a lampshade goes back to at least 1945 in the U.S. - and probably even earlier (Another article dates it to 1928.) It has also been suggested that this originated as a piece of "dirty" physical comedy: the man puts on the lamp-shade, exposes himself, and asks for someone to "turn him on" using his "switch".

Regardless, the cliche nature of it has turned it into a Dead Horse Trope. It's uncommon to find examples nowadays that aren't parodies of this.

Sometimes the lampshade wearer will say that they're feeling light-headed.

The same effect is sometimes achieved with a traffic cone, though in reality they tend to be too wide and heavy to be practical as headwear. Add to that the fact that they have to be drunk enough to consider stealing the cone in the first place, so cone wearers tend to be drunker than lampshade wearers.

Note, there is another reason you may see someone with a lampshade on their head: the Rule of Funny use as a Paper-Thin Disguise, in order to pretend to be a lamp. This has nothing to do with being drunk.

A Sister Trope to Necktie Headband (what a Japanese Salaryman will do instead).

Not to be confused with Lampshade Hanging.

"There are no delusions for the dead. Dying is like waking up after a really good party, when you have one or two seconds of innocent freedom before you recollect all the things you did last night which seemed so logical and hilarious at the time, and then you remember the really amazing thing you did with a lampshade and two balloons, which had them in stitches, and now realize you're going to have to look a lot of people in the eye today and you're sober now and so are they but you can both remember."

Adam: (to Jamie) I know I'm drunk, but I can't even remotely tell that you're drunk. It's kind of annoying. I want to see you put a lampshade on your head or something.

"Someone took a grapefruit and wore it like a hat."

Ben: Are you the guy with the lampshade on his head, or the guy chugging out of the punch bowl?
Quohog: Lampshade.

This is a big cone of bright orange plastic. You have no recollection of how or where you got it, but it's like I always say -- it's not a good night unless you end up with a traffic cone!

Madeline: Psst, Danielle, you be the queen.
Danielle: Me? Queen who?
Madeline: (thinks) AHA! (Puts lampshade over Danielle's head) Queen Lampshade!
Danielle: Fine, and you be Princess Drapery!