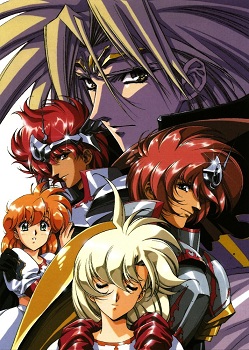 Leading lords and ladies of Langrisser I, II, and III

Langrisser is a series of Turn-Based Strategy games that is mostly Japan-only. They were published by NCS and developed by Career Soft, the latter of which went on to make the Growlanser series. The main series of Langrisser games is made up of five installments, many of which have been ported and updated a bewildering number of times. From a gameplay perspective, Langrisser is similar to games like Fire Emblem, but what sets Langrisser apart is its sense of scale. In a typical Turn-Based Strategy game, the player commands around twelve fighters per battle, while in Langrisser, there are hundreds of soldiers on the player's side alone, organized into battalions which are led by more powerful commanders. While ordinary soldiers fight in groups, commanders can single-handedly mow down scores of enemies in a single turn.

The main series games are set in a Medieval European Fantasy world, and most take place on a continent called El Sallia (later games introduce a second continent). El Sallia's history is not so much a series of conflicts as one long knock-down, drag-out war where everyone is fighting everyone else. Constantly. To make matters worse, there's an ongoing feud between the dark god, Chaos, and the goddess of light, Lushiris. Starting with Der Langrisser, the remake of Langrisser 2, the many of the games feature multiple story paths which allow the hero to ally with each of the factions. Der Langrisser was especially good at making all the different groups seem sympathetic. Langrisser 3 adds Relationship Values and Romance Sidequests to the mix as well, which reappear in all the games to follow.

Titles in the Langrisser series:

So far, only a few games have been translated into English. In 1992, Treco released Langrisser stateside under the title of Warsong, and a fan-made translation of the PC version exists. There is also a fan-made translation of the SNES remake of Langrisser II, Der Langrisser, which probably deserves a page of its own. As the subtitle of Langrisser V suggests, the series concluded right around the time Sega abandoned the Sega Saturn. NCS went on to produce the Millenium spinoff series without the input of the main series development team, with unfavorable results.

Tropes used in Langrisser include: