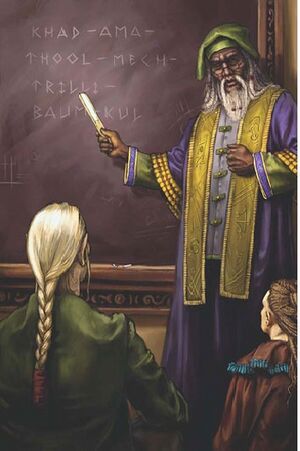 "[The wizard] jumped down, and started waving his arms around while he went to speaking and squealing in one of those languages wizards use so the rest of us will think there is something terribly strange and mystical about what they do, kind of like lawyers."
—Murgen, The Black Company

A version of Functional Magic where spells are cast by speaking in a particular language. Can be Words Can Break My Bones or I Know Your True Name taken to the Nth degree, where every word in the language is a "true name", but this need not be the case for it to be a language of magic.

Black Magic is often paired with Black Speech, White Magic is often in Angel song. In works set on Earth, the language may be a real-but-now-dead one, such as Latin. The words are often written in the Old Norse runic alphabet.

Words Can Break My Bones and I Know Your True Name are subtropes. May be the backbone of a Magical Incantation. If consistently sung to make it magic, that's Magic Music.

Examples of Language of Magic include:

Words Can Break My Bones examples

The Furies: Gryphon, you are old. Your flesh is meat, and the meat is decaying. Your bones are dry and brittle. Within you now, lion and eagle abandon their battle for dominance and surrender to time and to the grave.

Although use of the Old Speech binds a man to truth, this is not so with dragons. It is their own language, and they can lie in it...

Abruptly the bird spread its flaming wings and, soaring from its perch, cried out harshly: "Yagkoolan yok tha, xuthalla!"

Giles: Xander, don't speak Latin in front of the books.