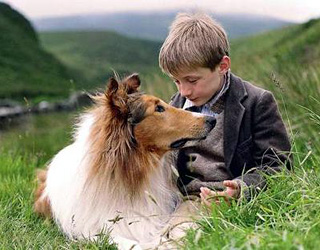 Lassie is a media franchise revolving around Lassie, a heroic pet.

The franchise began with the 1943 film Lassie Come Home (based on a novel by Eric Knight), but really took off with the long-running TV series ("What's that, Lassie? Timmy's fallen down a well?").

The original screen "Lassie" was a collie owned and trained by professional trainer Rudd Weatherwax, whose off-screen name was Pal. Pal starred in the 1943 film and six sequels; when the film series ended, Weatherwax acquired the Lassie trademark (in lieu of unpaid wages, according to one account), and the television series resulted. Pal retired partway through the two-decade run of the series, and was succeeded by a string of his descendants. (Yes, his. All the dogs who played Lassie were actually male; male collies were thought to be more visually impressive, and less subject to seasonal shedding issues.)

There have been various incarnations of Lassie in the media:

Parts of the franchise with their own trope pages include:
Lassie is the Trope Namer for:
The following tropes are common to many or all entries in the Lassie franchise.
For tropes specific to individual installments, visit their respective work pages.
References in other works:

Retrieved from "https://allthetropes.org/w/index.php?title=Lassie&oldid=1888031"
Categories:
Cookies help us deliver our services. By using our services, you agree to our use of cookies.