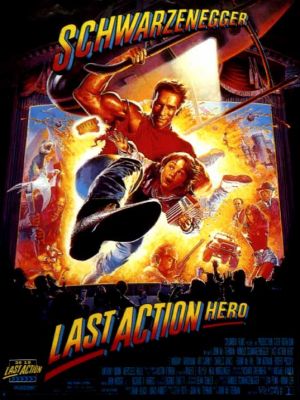 It was directed by John McTiernan, previously known for such films as Die Hard (1988), The Hunt for Red October (1990) and Medicine Man (1992). This was Schwarzenegger's first film after Terminator 2: Judgment Day. Made to appeal to a bigger family audience (it was PG-13) than most of his films, the wave of hype promised that it would be, as the trailers put it, "The big ticket for '93!". It was released in very close proximity to Jurassic Park, which was a bigger hit than Columbia Pictures expected. Last Action Hero failed to live up to the hype at the box office, and while it was eventually profitable, the film was widely regarded as a bomb.

Still, the movie is regarded as a cult classic and is often praised for poking fun at the action movie tropes.

Tropes used in Last Action Hero include:
Retrieved from "https://allthetropes.org/w/index.php?title=Last_Action_Hero&oldid=1767933"
Categories:
Cookies help us deliver our services. By using our services, you agree to our use of cookies.