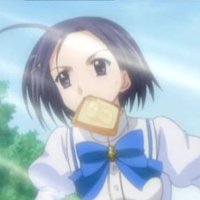 I should be on time unless I happen to run into any main characters of the preferred gender.

A common device for a series opening or Establishing Character Moment. Things begin in a frantic rush which usually results in taking short cuts, eating breakfast on the run. The classic image is of someone running down the street with a slice of toast hanging out of their mouth, dragging their backpack with one hand while trying to put on their jacket or sweater one-handed with the other, bumping into important people in a manner that gets the plot started.

Basically, they're never on time for school. While some are Heavy Sleepers, it would appear that they may have simply set their alarm clocks so as to give them insufficient time to get to class.

In Manga and Anime, this is associated with the Shoujo (girl's) genre, where the original intent was to establish the protagonist as cute but clumsy, or give her a minor flaw. Overused to the point of becoming a Discredited Trope; current Japanese "How to Become a Shoujo Manga-ka" books specifically advise against using this trope.

It's also Truth in Television, as any teenager/parent/college student will tell you.

Examples of Late for School include: