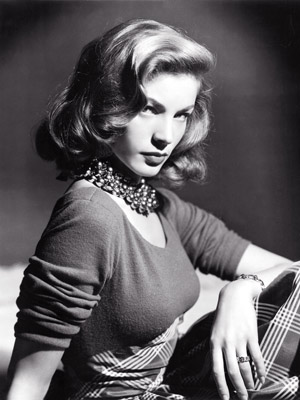 Lauren Bacall was one of the best, sexiest and sexiest-voiced actresses of 1940s and '50s Hollywood. Known for her range as an actress, she could do everything from serious, Film Noir dramatic roles like The Big Sleep to ridiculous comedies of errors like 1953's How to Marry a Millionaire (with Betty Grable and Marilyn Monroe).

Born Betty Joan Perske in 1924, she had a career that is a real example of Follow Your Dreams: after her parents separated, her mother encouraged the young Betty to make it big in show business. After a name change and hair coloring (the name "Perske" sounded too Jewish, apparently), she did. Bacall appeared in four movies with Humphrey Bogart, whom she married despite being over 20 years younger than him.

Starting in The Sixties, she stopped really appearing in films, but had a rather successful career on Broadway and as a liberal activist.

She often got Tsundere-type roles, proof that the trope is older than anime.

Incidentally, Bacall is a first cousin of Shimon Peres, Israel's current president and former prime minister, who won the Nobel Peace Prize with Rabin and Arafat for trying to fix the Arab-Israeli Conflict. Peres was born Szymon Perski. One wonders what their family reunions (if any) are like.

Lauren Bacall provides examples of the following tropes:
Filmography:
Retrieved from "https://allthetropes.org/w/index.php?title=Lauren_Bacall&oldid=1950557"
Categories:
Cookies help us deliver our services. By using our services, you agree to our use of cookies.