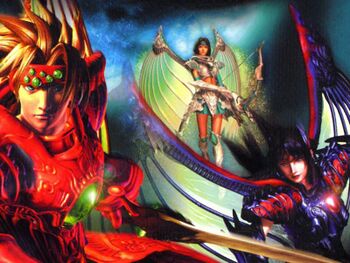 The first RPG developed by Sony Computer Entertainment, The Legend of Dragoon was released for the PlayStation in Japan in December 1999, North America in June 2000, and Europe in January 2001. It was heavily advertised with emphasis put on the development time (three years) and the size of the development team (over 100 members).

The game tells the story of Dart, who has been wandering the world for the past five years searching for the being who killed his parents and destroyed his hometown: the Black Monster. While traveling back to his adopted home of Seles, he is suddenly attacked by the legendary dragon Feyrbrand, and survives only through the intervention of a mysterious warrior woman named Rose. When Dart arrives at Seles, he discovers that the town has been attacked by the army, and his childhood friend Shana has been kidnapped.

This sets the stage for The Legend of Dragoon's plot, which begins as a simple Damsel in Distress story while Dart tries to rescue Shana, but quickly becomes a larger story concerning the fate of nations, peoples, and eventually the entire world. Dart must unravel the mysteries surrounding the dragoons, the mythical Dragon Campaign that took place 11,000 years ago, and the events happening in the world around him.

Despite an unenthusiastic critical response, the game sold fairly well. An engaging battle system that allowed characters to perform "Additions" via well-timed Action Commands was a big success, as was a Troperiffic plotline that manages to shift smoothly between genuinely moving, Narm Charm, and So Bad It's Good. The latter was helped by an inconsistent localization, but the game does manage an impressive amount of Playing With Tropes given its otherwise Cliché Storm story of a young man with a mysterious power embarking on an epic quest in a Standard Fantasy Setting. Oh, and there are dragons, too, so that's pretty awesome.

Fondly remembered as one of the last big games of the PlayStation era, The Legend of Dragoon is something of a Cult Classic, with a small but loyal fanbase even years after its release.

The Legend of Dragoon is now available on PSN in Japan and North America.

Absolutely no relation to Panzer Dragoon.

Tropes used in Legend of Dragoon include:

Retrieved from "https://allthetropes.org/w/index.php?title=Legend_of_Dragoon&oldid=1611032"
Categories:
Cookies help us deliver our services. By using our services, you agree to our use of cookies.