The Legend of Heroes: Trails in the Sky

Everything About Fiction You Never Wanted to Know.
(Redirected from Legend of Heroes VI)
Jump to navigation Jump to search 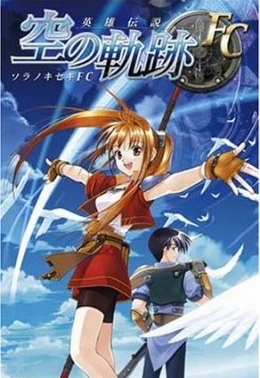 Just a story about a girl, a guy, and the simple adventures they get into...

Legend of Heroes VI, often called Sora no Kiseki or Trails in the Sky, is a JRPG released by Nihon Falcom in the mid-2000's, first on the PC and then on the PSP. It is an entry into Falcom's line of "traditional" turn-based story-heavy JRPGs (as opposed to the action RPGs of the Ys series), and it is without question the single most successful game-cum-franchise Falcom has released since the original Ys duology despite taking so long to leave Japan.

The story details the adventures of Estelle Bright and her adopted brother Joshua. They set out to be a pair of "Bracers", wandering adventurer-types who do good around the kingdom of Liberl, much like Estelle's father Cassius was in his prime. Soon after their adventure begins, however, they begin to get pulled into a series of events that could change the face of Liberl, not to mention answer certain questions about Joshua's past... even if they are answers Joshua might not want to hear.

The game is, in a word, gigantic. It was so large, in fact, that Falcom couldn't practically release it as one game; Sora no Kiseki FC (short for First Chapter) was released in mid-2004, with Second Chapter following nearly two years later (it was so large as to require two UMDs when released on the PSP in 2007). This, naturally, led to some complaining during SC's development, which was generally silenced when SC was released to nigh-rabid reviews. A year afterward, Sora no Kiseki the 3rd was released; it ended up being a bit of a Mission Pack Sequel (since the main plot of the game wraps up nicely in SC), but it still develops a few of the other party members and deals with some of the dangling side-plot hooks nicely, and so is generally respected. The series was so popular as to inspire an Intercontinuity Crossover fighting game with Ys, in the style of Marvel vs. Capcom.

A side effect of the game's bifurcated nature is that this is one of the few JRPGs in which choice matters. While the choices are (generally) not quite as sweeping as those in, say, Mass Effect, since you can carry save files forward between chapters, choices you make in one chapter can affect quests and dialogue in a following chapter and affect how quickly you rise through the ranks of the Bracers Guild. The games are also a bit more open-ended than most JRPGs, with lots of Bracer sidequests available alongside the main storyline (and, in fact, neglecting these can leave you a bit weak for the showdowns which await you at the end of Second Chapter).

Each of the three chapters technically tells their own story, although Second Chapter follows directly on from First Chapter (as in, it literally starts on the day after the end of the first) and if you dive right into SC, you are likely to end up a bit lost and confused. There are sixteen playable characters over the course of all three games, plus dozens of other secondary characters.

Just like the case of Falcom's other great RPG series Ys, the games have suffered greatly from No Export for You, which is the primary reason why the series is massively popular in Japan, right up there with the Tales (series) and Shin Megami Tensei (having sold over a million copies between the three chapters of the game, two proper sequels released in 2010 and 2011, both of which also sold like bonkers, an anime adaptation which came out in late 2011 and with fan events still being held six years after FC's release), but practically unheard of outside of it.

Do note, this page has a lot of marked spoilers; this is because talking about most of the tropes related to the game requires talking about the revelations the game makes later in its narrative (particularly in the second chapter), and some of these are legitimately amazing and shouldn't be casually ruined. Highlight spoilers at your own risk, and beware of spoilers on other sites, to boot.

Last but not least, the soundtrack for the series is awesome, especially once you get into Second Chapter and The 3rd. Falcom's JDK Band pretty much hit it out of the park again, and some of the songs included with the game have been hailed as among the best game themes ever, through vote, on places like 2channel.

First Chapter was localized and released in March 2011 for the PSP courtesy of XSEED Games (who worked on Nihon Falcom's Ys series previously). Due to the huge script, expect large gaps between games, but hey, Slow Export For You is better than No Export for You.[1]

The aforementioned sequel is Zero no Kiseki, which follows a new set of protagonists a few years after the events of Trails. That title was followed up by Ao no Kiseki, which continues the Zero story in the same way Trails SC continued the Trails FC story.

Tropes used in The Legend of Heroes: Trails in the Sky include:
Retrieved from "https://allthetropes.org/w/index.php?title=The_Legend_of_Heroes:_Trails_in_the_Sky&oldid=1708142"
Categories: