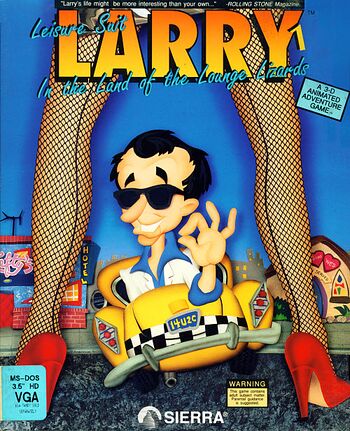 Bond, eat your heart out.

"Meet Larry. He's just turned 40, and he's still single. If you can get past the glow of his Grecian formula, you can see his hairline beginning to make a hasty retreat from his forehead. Larry's leisure suit is of the highest quality (100% manmade material, permanent press, too!) He wears at least 11 gold chains and his freshly-capped teeth could blind you in a bright light! Down at the singles bar he tells the chicks, "Sure, I'm single... I got in a fight with my ol' lady and she threw me out." He doesn't tell them the "ol' lady" was his mom, or that he was 38 at the time!"
—Official product description, Leisure Suit Larry in The Land of the Lounge Lizards

In the early Eighties, an up-and-coming programmer named Chuck Benton decided to test his programming skills by churning out a small, text-based Adventure Game for the Apple II by the title of Softporn Adventure. After the title received runaway success, its publisher Sierra Online decided that since the game was the only text-based game they'd published, the game was due for an upgrade, so they decided to delegate the task to in-house Disney game developer Al Lowe who, after taking a look at the game, figured the game was so outdated it might as well be wearing a leisure suit.

From thereon sprung Al Lowe's idea to take Softporn Adventure and remake it from the ground up, rewriting its script completely into something much funnier, and replacing its formerly anonymous protagonist with Larry Laffer, a computer programmer in his early 40's who decides to get a life and go woo some women and lose his virginity by the end of his nocturnal visit to Lost Wages. Being a big fan of The Seventies, he loves disco and wears a leisure suit (which he and only he thinks is cool) from which the newly reborn Leisure Suit Larry took its name.

At its time of release, the game became widely known for its raunchy content and surprisingly varied level of world interactivity (thanks to being the first Sierra game to be publicly tested). The game was followed up by two sequels before the famed fourth game in the franchise failed to ship and Al Lowe decided to skip straight to the fifth game and keep going until the seventh. The franchise was then left to Sierra's hands to pass around to different developers.

The focus of the series strayed from Larry Laffer to his similarly dorky nephew, Larry Lovage. The results are considered lackluster, and differed greatly in gameplay, leaving out the adventure-gaming and consisting mostly of either mini-games or a Grand Theft Auto-like interface.

Al Lowe and fellow Sierra On-Line adventure game alumnus Paul Trow have announced that the first few Leisure Suit Larry games will be remade with new artwork and HD graphics, and created a Kickstarter campaign to fund it.

Narrator: Larry, the whole idea was to stop doing that!

Narrator: "Hey! Is that Disneyland? Nah, not in an Al Lowe game!" (which is ironic as Al Lowe used to work for Disney).

Narrator: You mount a big piece of wood (an experience not wholly unfamiliar to you).

She's really turning you on! You had no idea fruit could be so exciting.

Ken: "I am the handsome sailor who entertains the kids on this ship!
Larry: "But I didn't see a kid anywhere!"
Interviewer: "That is because this game is too dirty for kids!"

Interviewer: "Leisure Suit Larry! You've just leapt from the 40th floor of a burning building! What are you going to do next?"
Larry: "I think I'm going to... take a cruise!"

"Why, Mr. and Mrs. Rich/Famous/Gates/Leach/Williams," says the Maitre d'. "What a pleasure to see you again. Of course I have a table for you!"
"Please, walk this way."
Well, that was certainly rude! You were here before them. You feel yourself becoming perturbed/annoyed/indignant/incensed/enraged!
"I hope you find this satisfactory, Sir," grovels the Maitre d' with his palm extended.

Larry: "Hi, is by any chance your name George?"